Ancient stardust extracted from a meteorite contains specks that are up to about 3 billion years older than the solar system, making them the oldest solids ever dated in a lab, researchers report.

Unlike most of the other stardust that went into building our solar system, these microscopic grains have remained intact since they were shed by aging stars billions of years ago. The exotic makeup of the silicon carbide grains, from a meteorite that landed in Australia more than 50 years ago, tipped scientists off that the minerals were older than the solar system 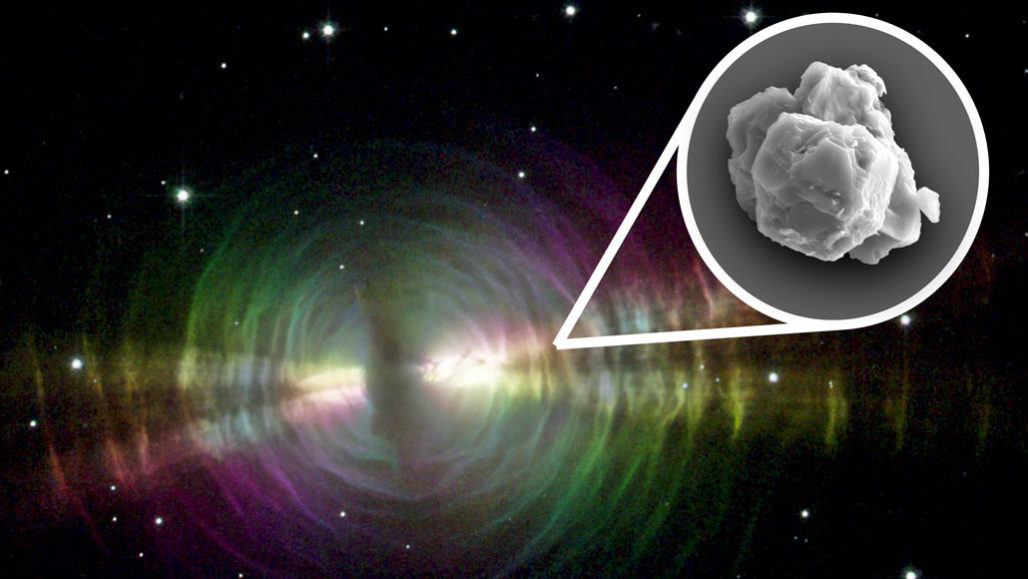 Bits of dust expelled by aging stars (like those in the Egg Nebula plume, pictured) and brought to Earth on a meteorite are the oldest ever dated in a lab. One 8-micrometer grain is also shown.

If the Fried Egg Nebula were placed in the center of the Solar System the Earth would lie deep within the star itself and the planet Jupiter would be orbiting just above its surface. The much larger surrounding nebula would engulf all the planets and dwarf planets and even some of the comets that orbit far beyond the orbit of Neptune. The outer shell has a radius of 10,000 times the distance from the Earth to the Sun.

Yellow hypergiants are in an extremely active phase of their evolution, undergoing a series of explosive events — this star has ejected four times the mass of the Sun in just a few hundred years. The material flung out during these bursts has formed the extensive double shell of the nebula, which is made of dust rich in silicates and mixed with gas.

This activity also shows that the star is likely to soon die an explosive death — it will be one of the next supernova explosions in our galaxy. Supernovae provide much-needed chemicals to the surrounding interstellar environment and the resulting shock waves can kick start the formation of new stars.
_________________