A team of scientists from the University of Rhode Island and the Charles Darwin Research Station exploring the seafloor northwest of the Galapagos Islands in 2015 made an unexpected discovery. Large numbers of egg cases of a deep-sea skate – relatives of sharks and rays – were observed adjacent to the hot water emitted from hydrothermal vents, which the scientists said the skates use to accelerate the development of the embryos.

It is the first time such behavior has been recorded in marine animals. The discovery is published this week in the journal Scientific Reports.

Brennan Phillips, URI assistant professor of ocean engineering, was leading the operations team of remotely-operated vehicle operators during the expedition to explore the underwater mountains around the Galapagos. He said they didn't recognize the significance of the aggregation of skate eggs until much later.

"We were on a really deep dive in a hydrothermally-active rift valley, with walls 30 meters tall on either side, and the ROV was meandering back and forth looking for vents," Phillips explained. "We started noticing all these egg cases, and we recorded their location and collected a few but then just kept going."

Later, when the egg locations were analyzed and compared to hydrothermal vent locations and recorded water temperatures, the scientists concluded that the eggs were likely intentionally placed by the skates where the water was warmer than average. 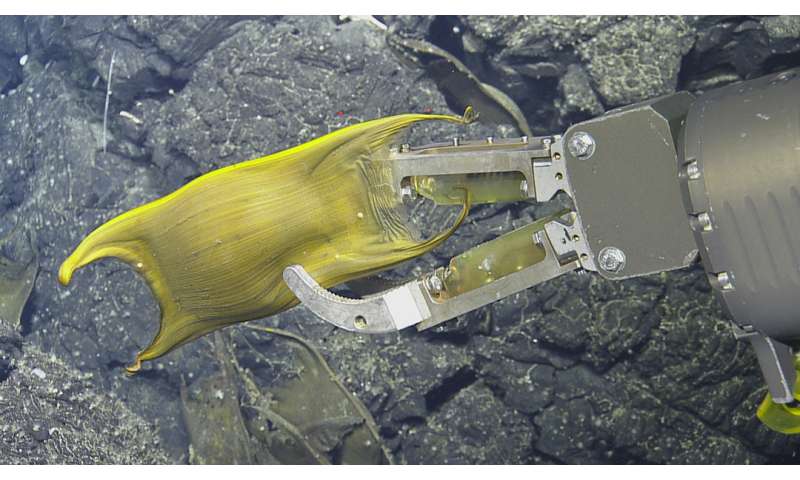 The robotic arm of a remotely operated vehicle collects an egg case from a Pacific white skate near the Galapagos Islands.

In June 2015, a team of researchers aboard E/V Nautilus made a surprising discovery while exploring the seafloor northwest of the Galapagos Islands. Large numbers of skate egg cases were observed near hydrothermal vents emitting volcanically-heated fluids. Researchers believe the warmer water helps to incubate and speed development of the embryos--the first time this behavior has been observed in marine animals. The Bathyraja spinosissima, commonly known as Pacific white skate, is a relative of sharks and rays.

As one of the deepest living skate species, this species is rarely seen but has been documented from the Galapagos Islands to the Pacific Northwest.