An international team of astronomers has found three new millisecond pulsars (MSPs) in a Milky Way globular cluster called Terzan 5. The new discovery increases the number of identified pulsars in Terzan 5 to 37 and makes this cluster the most efficient factory of MSPs in the galaxy known to date. The finding is reported January 30 in a paper published on arXiv.org.

Millisecond pulsars spin rapidly, at hundreds of times per second. Astronomers searching for new MSPs focus their observations on globular clusters (GCs), as such gravitationally bound collections of stars are ideal factories for the formation of a large variety of astronomical objects, including pulsars. So far, 146 MSPs were detected in 28 globular clusters, but it is believed that a very large population of several thousand millisecond pulsars is still to be uncovered. 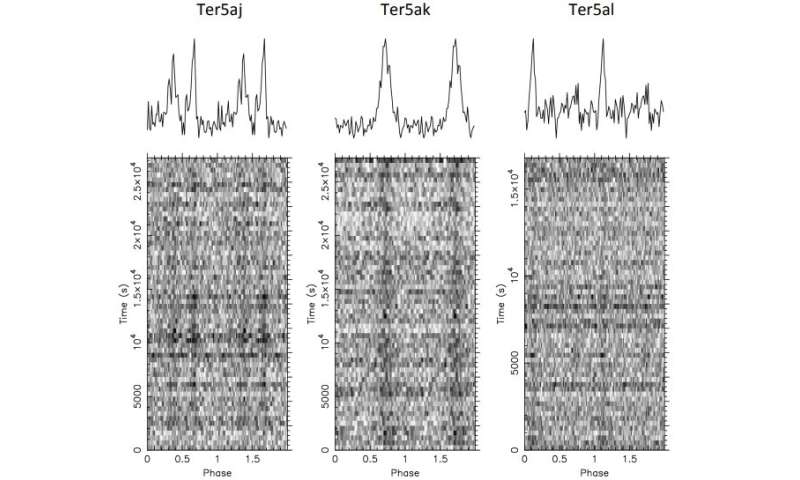 Top panels: Averaged pulse profiles of the best detections of Ter5aj (on the left), Ter5ak (in the middle) and Ter5al (on the right). Bottom panel: Intensity of the signal (gray scale) as a function of the rotational phase and time for each MSP.

This sequence takes the viewer from a wide view of the Milky Way to the central regions, where many bright star forming regions and star clusters can be seen. The final view is a close-up of the sky around the star cluster Terzan 5 taken with the Hubble Space Telescope.