Now in an elliptical orbit around the sun, the Tesla Roadster launched atop a SpaceX Falcon Heavy rocket Tuesday during the powerful booster's maiden flight was expected to pass beyond the moon's orbit overnight Wednesday and reach the orbit of Mars in July as it puts Earth in its rear view mirror, analysts said. While SpaceX founder and chief designer Elon Musk has said he likes to imagine the Tesla remaining in orbit for hundreds of millions of years or more, Jupiter's orbit is likely to fling it back to the solar system long before then.

Jonathan McDowell, an astronomer at the Harvard-Smithsonian Center for Astrophysics and a noted space analyst, says two forces acting on the car will limit its lifetime.

One is Jupiter. The giant planet's gravity perturbs bodies in the asteroid belt and, over time, will have an effect on the Tesla's trajectory. The other effect is a subtle acceleration produced by tiny temperature-related forces over extremely long periods that also would act to change the orbit.

"It's tiny, but over timescales of millions of years it's enough to shrink the orbit and make the thing fall into the sun," McDowell said. "So it's a race between does that happen before some Jupiter perturbation ejects it from the system.

The SpaceX founder and CEO held a press conference hours after the Falcon Heavy successfully launched from Kennedy Space Center on Tuesday.

Tesla in space could carry bacteria from Earth

NASA's Office of Planetary Protection makes sure spacecraft planning to land on other planets are sterile. Much like an invasive species, organisms from Earth could thrive on another planet and wipe out native organisms. After all, it was bacteria that stopped the Martian invasion in H. G. Wells' fictional "War of the Worlds."

"If there is an indigenous Mars biota, it's at risk of being contaminated by terrestrial life," said Jay Melosh, a professor of earth, atmospheric and planetary sciences at Purdue University. "Would Earth's organisms be better adapted, take over Mars and contaminate it so we don't know what indigenous Mars was like, or would they be not as well adapted as the Martian organisms? We don't know."

But the Office of Planetary Protection doesn't regulate spacecraft that plan to stay in orbit; since the Tesla was never intended to land, it wasn't cleaned before takeoff.

"Even if they radiated the outside, the engine would be dirty," Melosh said. "Cars aren't assembled clean. And even then, there's a big difference between clean and sterile."

The Tesla could potentially land on Mars, although it's unlikely, he said. The car is in an orbit that crosses Earth's and Mars', and it will probably end up striking Earth, but it could be millions of years before that happens. 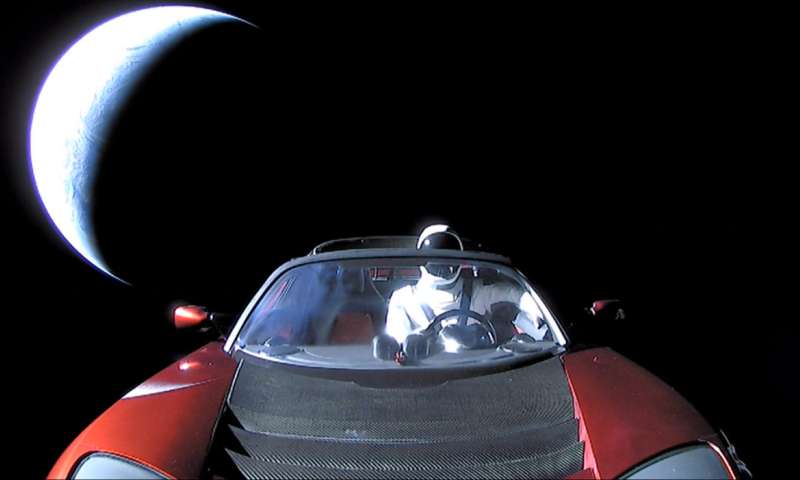 A red Tesla convertible hitched a ride to space with a SpaceX rocket in early February, bringing with it what may be the largest load of earthly bacteria to ever enter space.