The climate on early Mars has presented an enigma for planetary scientists because surface features such as valley networks indicate abundant liquid water was present and the clay minerals found in most ancient surface rocks need even warmer temperatures to form, while atmospheric models generally support a cold climate on early Mars. This new study led by Janice Bishop of the SETI Institute and NASA's Ames Research Center in Silicon Valley has addressed this question by investigating the conditions needed for the formation of the ancient surface clays.

Part of this early Martian climate puzzle comes down to how "warm" is warm. Currently Mars' temperature is below freezing, but we know it must once have been warm enough for liquid water to carve out features on the surface. However, cold water is not warm enough for surface clays to form. "We realized that in order to better constrain the early Martian climate, we needed to understand the formation conditions of Martian clays," said Bishop. 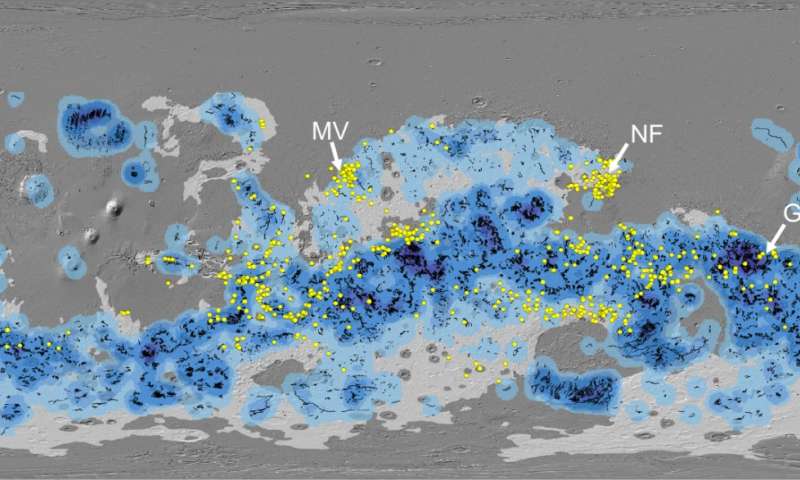 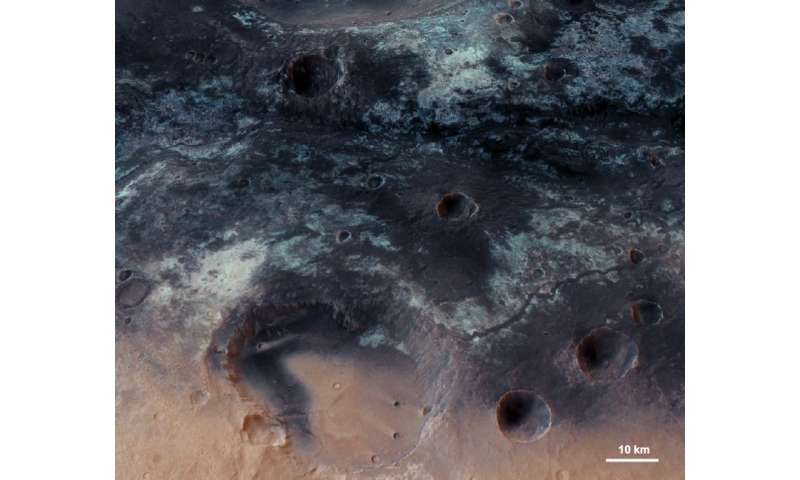 A view of light-toned phyllosilicates at Mawrth Vallis, Mars captured by the High Resolution Stereo Camera (HRSC) flown on Mars Express and provided by DLR and Free University in Berlin. This image illustrates water features cutting through the thick surface clay deposits.

Here are the details of Curiosity's discovery of ancient conditions in Yellowknife Bay in Mars' Gale Crater, from NASA's Jet Propulsion Lab. Ancient Mars could have supported living microbes. That's what the Mars Curiosity turned up in its first major discovery. Scientists identified sulfur, nitrogen, hydrogen, oxygen, phosphorus and carbon -- some of the key chemical ingredients for life -- in the powder Curiosity drilled out of a sedimentary rock near an ancient stream bed in Gale Crater on the Red Planet last month.

The data indicate the Yellowknife Bay area the rover is exploring was the end of an ancient river system or an intermittently wet lake bed that could have provided chemical energy and other favorable conditions for microbes. The rock is made up of a fine-grained mudstone containing clay minerals, sulfate minerals and other chemicals. This ancient wet environment, unlike some others on Mars, was not harshly oxidizing, acidic or extremely salty.

The patch of bedrock where Curiosity drilled for its first sample lies in an ancient network of stream channels descending from the rim of Gale Crater. The bedrock also is fine-grained mudstone and shows evidence of multiple periods of wet conditions, including nodules and veins.

Curiosity's drill collected the sample at a site just a few hundred yards away from where the rover earlier found an ancient streambed in September 2012. The clay minerals it found are a product of the reaction of relatively fresh water with igneous minerals, such as olivine, also present in the sediment. The reaction could have taken place within the sedimentary deposit, during transport of the sediment, or in the source region of the sediment. The presence of calcium sulfate along with the clay suggests the soil is neutral or mildly alkaline.

Scientists were surprised to find a mixture of oxidized, less-oxidized, and even non-oxidized chemicals, providing an energy gradient of the sort many microbes on Earth exploit to live. This partial oxidation was first hinted at when the drill cuttings were revealed to be gray rather than red.

Mawrth Vallis, one of the oldest valleys on the Red Planet, was one of the final four candidate landing spots for the Mars Science Laboratory and for good reason: there are clay minerals here that most likely formed in the presence of water.

I have no doubt that there is life out there, I feel all of this is just the tip of the iceberg

Dragon wrote:Scientists were surprised to find a mixture of oxidized, less-oxidized, and even non-oxidized chemicals, providing an energy gradient of the sort many microbes on Earth exploit to live. This partial oxidation was first hinted at when the drill cuttings were revealed to be gray rather than red.