In findings published today in The Astrophysical Journal, University of Texas at Austin astronomers report that they have stumbled on an extraordinary galaxy that may corroborate a recently contested theory about dark matter.

Dark matter is matter that does not give off any light, but is detectable by its gravitational pull on other matter. It was first discovered in the 1970s in studies of spiral galaxies, whose outer regions rotated too fast only to be driven by the visible stars and gas in those regions. Astronomers reasoned there must be more mass that is unseen. Decades of galaxy observations have shown that almost all galaxies contain huge quantities of this "dark matter," and that, in fact, there is about five times as much dark matter as there is normal, visible matter in the universe.

However, a few recent studies have indicated that some galaxies don't follow the same pattern as the "dark matter-rich" galaxies found since the 1970s. These studies showed a handful of galaxies seen around 10 billion years ago do not contain the expected quantity of dark matter. This could mean that galaxies at that time didn't have much dark matter but gained it later, at some point in the past 10 billion years. If that's the case, it would challenge our fundamental understanding of how galaxies form. 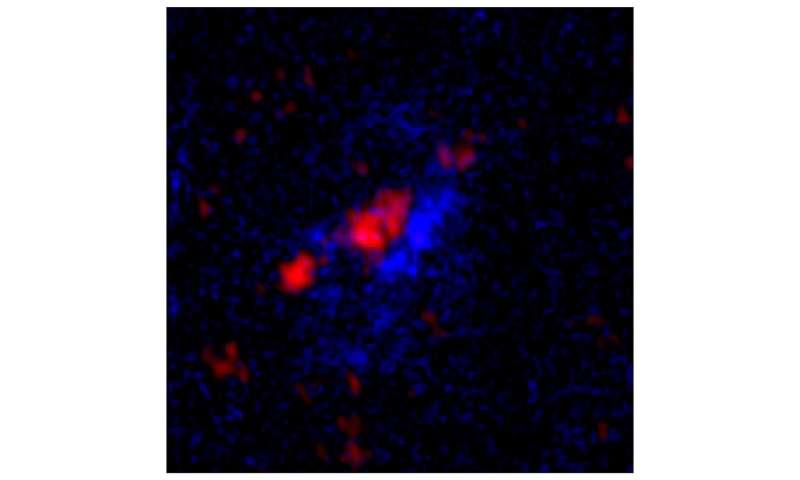 This composite image of the dusty star-forming galaxy DSFG850.95 shows young stars, seen in blue from Hubble Space Telescope, and dust, seen in red by the Atacama Large Millimeter/submillimeter Array

Approximately 160 million light years from Earth, the pair is the nearest known such phenomenon. The black holes are located near the center of the spiral galaxy NGC 3393.

NASA's Hubble Space Telescope reveals a majestic disk of stars and dust lanes in this view of the spiral galaxy NGC 2841, which lies 46 million light-years away in the constellation of Ursa Major (The Great Bear).
_________________