The rose rock (otherwise known as barite rose, desert rose, or selenite rose) gets its name from its striking appearance: The rock formation is akin to that of a rose in bloom. Its “petals” are layers of flattened crystals that fan outward from its center, giving it a delicate floral look. Their reddish hue adds an extra rosy touch.

This unique formation makes a rose rock easily identifiable even to the most novice of rockhounds. Though it may form individually or in small groupings, some sprout up together in large clusters of rocks that can weigh more than a thousand—yes, a thousand!—pounds.

The rose rock materializes in arid, sandy places around the world like Egypt, Spain, and Mexico. However, it is central Oklahoma where the largest quantity of well-formed rose rocks can be found. These particular stones were created 250 million years ago when the sea that once covered the land retreated and the water began crystallizing around the quartz sand.

Oklahoma is so fond of the flower-shaped stone it made it the official state rock in 1968. The small town of Noble, located just south of Oklahoma City, is known as the “rose rock capital of the world.” 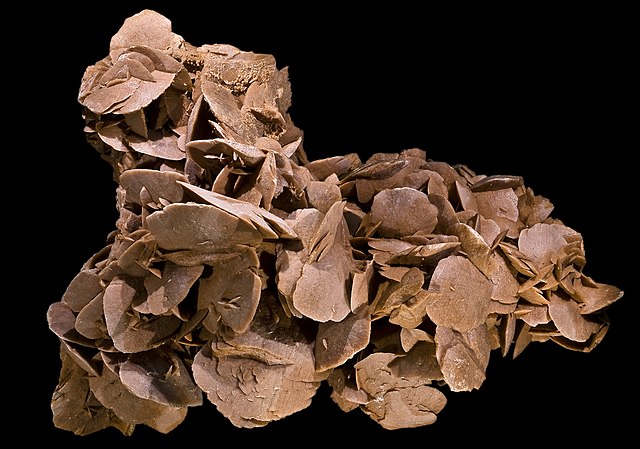 Desert rose is the colloquial name given to rose-like formations of crystal clusters of gypsum or baryte which include abundant sand grains. The 'petals' are crystals flattened on the c crystallographic axis, fanning open in radiating flattened crystal clusters.

Oh wow, these are beautiful. Never seen anything like them before. Thank you for sharing , Dragon

Despite its rose petal like softness, Desert Rose is a stone that will help you stand your ground and confront any hardship.

It will show you how to commit to a project with confidence despite the numerable obstacles. By staying focussed on your outcome you can manage the challenges with an optimistic attitude. Desert Rose will support you in your endeavours to realise your dream.

The Desert Rose is also referred to as the Sand Rose, Selenite Rose or Gypsum Rose. Found in dry, desert regions, each one is said to contain a unique spirit guardian.

They have traditionally been used as talismans for protection, overcoming phobias and to help boost self confidence. Particularly helpful for shy or timid children and teens to help them uncover and confidently express their talents.
_________________

Dragon wrote:They have traditionally been used as talismans for protection, overcoming phobias and to help boost self confidence. Particularly helpful for shy or timid children and teens to help them uncover and confidently express their talents