University of Sydney astronomers, working with international colleagues, have found a star system like none seen before in our galaxy.

The scientists believe one of the stars—about 8000 light years from Earth—is the first known candidate in the Milky Way to produce a dangerous gamma-ray burst, among the most energetic events in the universe, when it explodes and dies.

The system, comprising a pair of scorchingly luminous stars, was nicknamed Apep by the team after the serpentine Egyptian god of chaos. One star is on the brink of a massive supernova explosion. 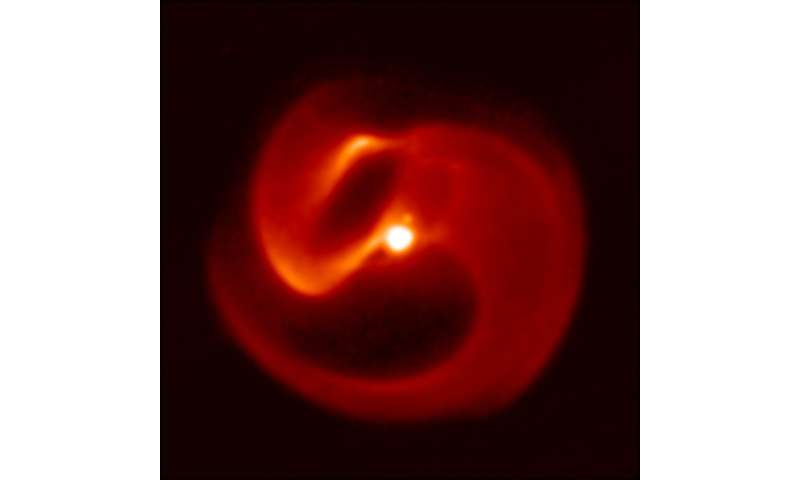 This is an image of Apep captured at 8 microns in the thermal infrared with the VISIR camera on the European Southern Observatory's VLT telescope, Mt Paranal, Chile. The system can be seen to be a binary, with a much fainter companion to the North of the heart of the system. This companion is not believed to play a role in the sculping of the extended dust plume, about 12 arcseconds across. The origin of this structure comes from the central region, believed itself to contain a binary (the whole thing being a triple star).

Yet in the southern constellation of Norma, nestled just beneath Scorpio's tail, astronomers have discovered this uniquely beautiful star system.

At its heart, wrapped in an elegantly sculpted plume of dust and gas, lies a powerful binary pair. The two hot, luminous stars—known to astronomers as Wolf-Rayets - orbit each other every hundred years or so, according to the research conducted at the Sydney Institute for Astronomy.

This orbital dance is embossed on a fast wind streaming off the stars. Using spectroscopy, the astronomers have measured the velocity of the stellar winds as fast as 12 million kilometres an hour, about 1 percent the speed of light.
_________________