A record-setting Russian spacewalk ended with a critical antenna in the wrong position Friday outside the International Space Station.

NASA's Mission Control reported that the antenna was still working. Nevertheless, Russian space officials were convening a special team to see whether further action would be necessary. The antenna is used for communications with Russia's Mission Control outside Moscow.

The trouble arose toward the end of the more than 8 hour spacewalk— the longest ever by Russians and the fifth longest overall—after Commander Alexander Misurkin and Anton Shkaplerov successfully replaced an electronics box to upgrade the antenna.

The pair watched in dismay as the antenna got hung up on the Russian side of the complex and could not be extended properly. The antenna—a long boom with a 4-foot dish at the end—had been folded up before the repair work.

Misurkin and Shkaplerov pushed, as flight controllers tried repeatedly, via remote commanding, to rotate the antenna into the right position. Finally, someone shouted in Russian, "It's moving. It's in place."

Re: Recording-setting spacewalk ends with antenna in wrong spot 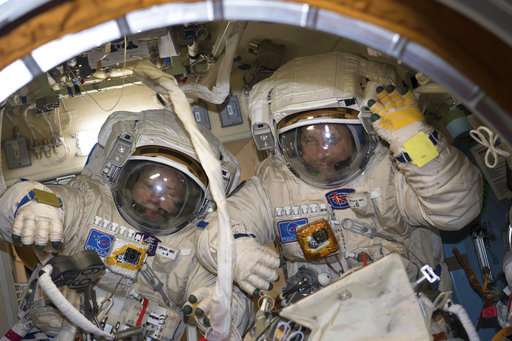 This Jan. 31, 2018 photo made available by NASA shows cosmonauts Alexander Misurkin, left, and Anton Shkaplerov in their Russian Orlan spacesuits during a fit check inside the International Space Station. On Friday, Feb. 2, 2018, the two removed an old electronics box as part of an antenna upgrade at the ISS, then tossed it overboard as a piece of junk.