On Jan. 20, 2018, amateur astronomer Scott Tilley detected an unexpected signal coming from what he later postulated was NASA's long-lost IMAGE satellite, which had not been in contact since 2005. On Jan. 30, NASA—along with help from a community of IMAGE scientists and engineers—confirmed that the signal was indeed from the IMAGE spacecraft. Whatever the next steps for IMAGE may be, the mission's nearly six years in operation provided robust research about the space around Earth that continue to guide science to this day.

On March 25, 2000, NASA launched the Imager for Magnetopause-to-Aurora Global Exploration, or IMAGE, mission. It was the first mission to use neutral atom, photon and radio imaging techniques to produce large-scale, simultaneous measurements of the charged particles that exist in near-Earth space—namely in our magnetosphere, the magnetic fields that surround our planet, and its inner bubble of cold material called the plasmasphere. 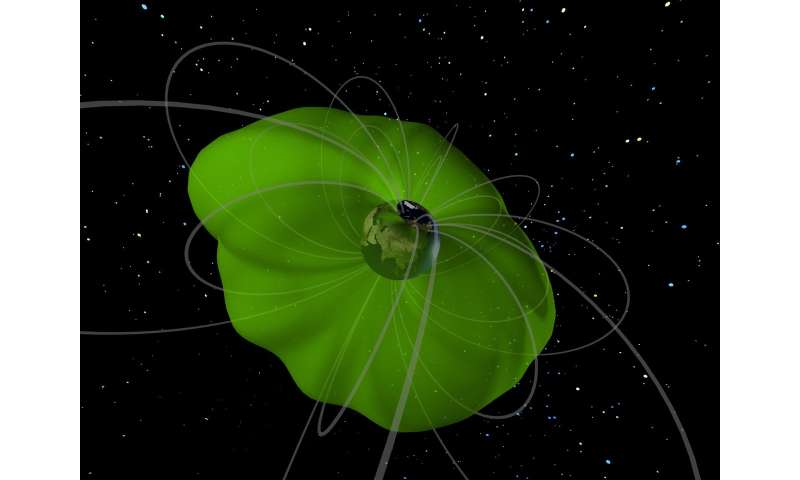 An oblique view of the plasmasphere, reconstructed from IMAGE data.

IMAGE captured the South Pole aurora caused by a coronal mass ejection in the fall of 2003.

From space, the aurora is a crown of light that circles each of Earth's poles. The IMAGE satellite captured this view of the aurora australis (southern lights) on September 11, 2005, four days after a record-setting solar flare sent plasma—an ionized gas of protons and electrons—flying towards the Earth. The ring of light that the solar storm generated over Antarctica glows green in the ultraviolet part of the spectrum, shown in this image. The IMAGE observations of the aurora are overlaid onto NASA's satellite.

» Pulsating Aurora Mysteries Uncovered with Help from NASA’s THEMIS Mission
» Research investigates variability of the blazar Mrk 421
» Evidence of aliens? What to make of research and reporting on 'Oumuamua, our visitor from space
» Rosetta spacecraft detects unexpected ultraviolet aurora at a comet
» Big CME direct hit expected. Aurora alert
Current date/time is Tue May 17, 2022 6:19 am