A University of Oklahoma astrophysics team has discovered for the first time a population of planets beyond the Milky Way galaxy. Using microlensing—an astronomical phenomenon and the only known method capable of discovering planets at truly great distances from the Earth among other detection techniques—OU researchers were able to detect objects in extragalactic galaxies that range from the mass of the Moon to the mass of Jupiter.

Xinyu Dai, professor in the Homer L. Dodge Department of Physics and Astronomy, OU College of Arts and Sciences, with OU postdoctoral researcher Eduardo Guerras, made the discovery with data from the National Aeronautics and Space Administration's Chandra X-ray Observatory, a telescope in space that is controlled by the Smithsonian Astrophysical Observatory.

"We are very excited about this discovery. This is the first time anyone has discovered planets outside our galaxy," said Dai. "These small planets are the best candidate for the signature we observed in this study using the microlensing technique. We analyzed the high frequency of the signature by modeling the data to determine the mass."

While planets are often discovered within the Milky Way using microlensing, the gravitational effect of even small objects can create high magnification leading to a signature that can be modeled and explained in extragalactic galaxies. Until this study, there has been no evidence of planets in other galaxies. 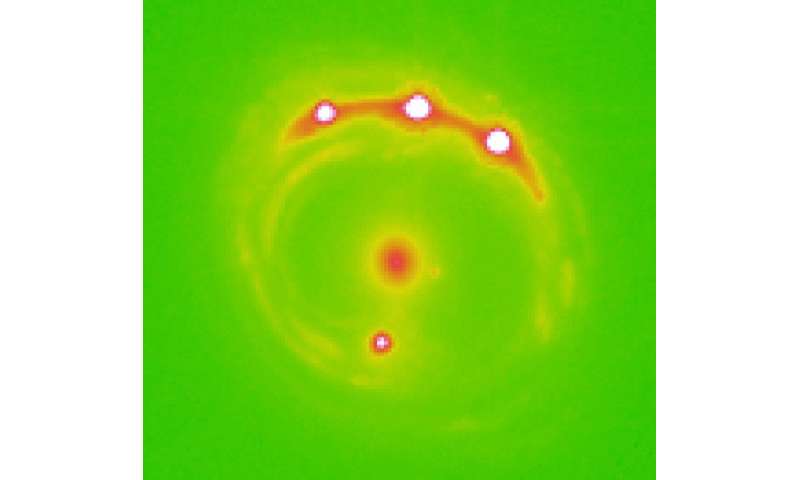 The gravitational lens RX J1131-1231 galaxy with the lens galaxy at the center and four lensed background quasars. It is estimated that there are trillions of planets in the center elliptical galaxy in this image.

Until now, microlensing has only been used to detect planets in the Milky Way, according to the researchers.With quasar microlensing, they say it’s possible to see extragalactic planets inside the lens galaxy based on the properties of emission near the event horizon of the supermassive