Hidden in a distant galaxy cluster collision are wisps of gas resembling the starship Enterprise — an iconic spaceship from the "Star Trek" franchise.

Galaxy clusters — cosmic structures containing hundreds or even thousands of galaxies — are the largest objects in the Universe held together by gravity. Multi-million-degree gas fills the space in between the individual galaxies. The mass of the hot gas is about six times greater than that of all the galaxies combined. This superheated gas is invisible to optical telescopes, but shines brightly in X-rays, so an X-ray telescope like NASA's Chandra X-ray Observatory is required to study it. 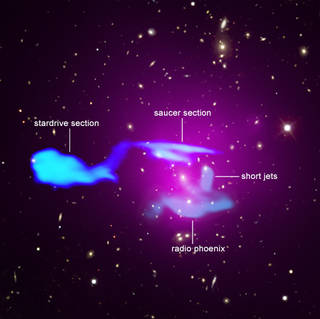 By combining X-rays with other types of light, such as radio waves, a more complete picture of these important cosmic objects can be obtained. A new composite image of the galaxy cluster Abell 1033, including X-rays from Chandra (purple) and radio emission from the Low-Frequency Array (LOFAR) network in the Netherlands (blue), does just that. Optical emission from the Sloan Digital Sky Survey is also shown. The galaxy cluster is located about 1.6 billion light years from Earth.

This view of the galaxy cluster Abell 1033 combines X-rays from Chandra with radio emission from a network of telescopes in the Netherlands called LOFAR.

The result is an image that bears an uncanny resemblance to the Starship Enterprise of the Star Trek franchise.