Emission from the centre of a galaxy has a serpentine shape

Emission from the centre of a galaxy has a serpentine shape

An international group of scientists led by members of the National Instituto of Astrophysics (Osservatorio Astronomico di Torino (INAF-OATo) has discovered a peculiar spiral-shaped blazar jet with many twists. The results of these observations are published today in Nature magazine.

A blazar is an astronomical object within an elliptical galaxy occupied by a central supermassive black hole that emits jets of radiation and particles with high energy. When these are directed towards the Earth, astronomers can detect them. They are among the most energetic phenomena in the universe.

In the second half of last year, the blazar CTA 102, which is 7,600 million light years from Earth, brightened considerably, drawing the attention of all the astronomers who specialise in this kind of object. The peak emission was detected on December 28th when it was 3,500 times greater than the brightness minima observed in previous years. This event was so exceptional that for a few days, this object was the brightest blazar ever observed. 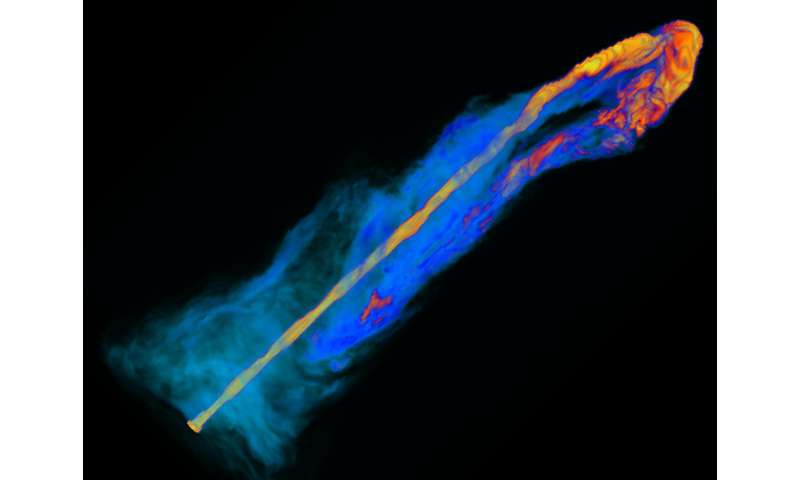 A blazar is a very compact quasar (quasi-stellar radio source) associated with a presumed supermassive black hole at the center of an active, giant elliptical galaxy. Blazars are among the most energetic phenomena in the universe and are an important topic in extragalactic astronomy.

Blazars are members of a larger group of active galaxies that host active galactic nuclei (AGN). A few rare objects may be "intermediate blazars" that appear to have a mixture of properties from both optically violent variable (OVV) quasars and BL Lac objects. The name "blazar" was originally coined in 1978 by astronomer Edward Spiegel to denote the combination of these two classes.

Blazars emit a relativistic jet that is pointing in the general direction of the Earth. The jet's path corresponds with our line of sight, which accounts for the rapid variability and compact features of both types of blazars. Many blazars have apparent superluminal features within the first few parsecs of their jets, probably due to relativistic shock fronts.

» We found a mysterious flashing radio signal from near the centre of the galaxy
» Herschel's view of the galactic centre
» Emission Nebula in Monoceros
» Natural Radio Emission from Ionosphere of Venus
» Multiple gamma-ray emission regions detected in the blazar 3C 279
Current date/time is Tue May 17, 2022 5:29 am