The word "HAZMAT" describes substances that pose a risk to the environment, or even to life itself. Imagine the term being applied to entire planets, where violent flares from the host star may make worlds uninhabitable by affecting their atmospheres.

"M dwarf" is the astronomical term for a red dwarf star—the smallest, most abundant and longest-lived type of star in our galaxy. The HAZMAT program is an ultraviolet survey of red dwarfs at three different ages: young, intermediate, and old. 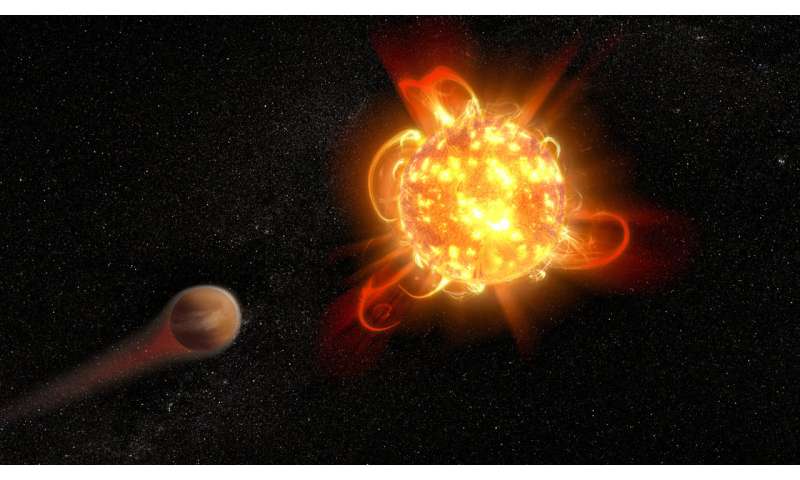 In this artist's rendering, an active, young red dwarf (right) is stripping the atmosphere from an orbiting planet (left). Scientists found that flares from the youngest red dwarfs they surveyed -- approximately 40 million years old -- are 100 to 1,000 times more energetic than when the stars are older.

They also detected one of the most intense stellar flares ever observed in ultraviolet light -- more energetic than the most powerful flare ever recorded from our Sun.

New observations by two Arizona State University astronomers using the Hubble Space Telescope have caught a red dwarf star in a violent outburst, or superflare. The blast of radiation was more powerful than any such outburst ever detected from the Sun, and would likely affect the habiltability of any planets orbitiing it.