When first discovered, the mushroom was thought to be about 110 tons, but new research estimates that it actually weighs roughly four times that much— and is a millennium older.

When people think of the Earth’s largest organisms they usually imagine whales, elephants, and dinosaurs. Turns out though that the largest organisms on Earth aren’t animals at all, but a species of humungous fungus that lives right beneath our feet.

One of the most notable examples of this impressive fungus, known as Armillaria gallica, is located in Crystal Creek, Mich. A team of researchers originally discovered the mushroom back in the late 1980s and dubbed it the largest single organism in the world.

At the time, the researchers estimated that the fungus clocked in at 110 tons and was an astonishing 1,500-years-old. However, a new study by the same team published in bioRxiv this year reveals that the fungus is much more massive and much older than they originally thought.

The team took 245 samples across the mushroom, examined these, and concluded that all of the samples did indeed originate from one single organism. This means that the single fungal strain covers 90 acres of land on the Upper Peninsula of Michigan: and is two times the size of New York City’s Grand Central Station.

The study posits also that the massive organism is actually 2,500-years-old— a millennium older than initially believed— and is roughly four times heavier than they previously thought, weighing a whopping 440 tons, which is equivalent to three blue whales.

A group of five yellow-brown mushrooms clustered together. The mushroom caps are roughly convex, and have their edges rolled inwards towards the stem. The cap surfaces are covered with small short yellow scales. The stems are thick, with a thickness of about a third to a half the width of the caps. The mushrooms are growing in the dirt. 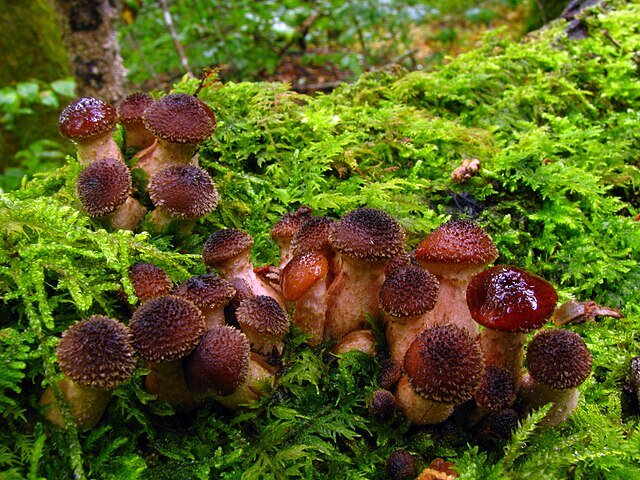 The fruit bodies—the visible manifestation of A. gallica—belie an extensive underground network of mycelia.

Located in the Blue Mountains of Oregon in the United States and discovered in 1998, the Humongous Pathogenic Fungus is scientifically defined as having a single set of genetically identical cells that are coordinated and working as one.

Mind you, or as you may have guessed, the bulk of this amazing entity is actually located underground; the parts that are visible, and in fact are only visible for a short time in the autumn, are called “honey mushrooms”.
_________________

Next time you purchase white button mushrooms at the grocery store, just remember, they may be cute and bite-size but they have a relative out west that occupies some 2,384 acres (965 hectares) of soil in Oregon's Blue Mountains. Put another way, this humongous fungus would encompass 1,665 football fields, or nearly four square miles (10 square kilometers) of turf.

The discovery of this giant Armillaria ostoyae in 1998 heralded a new record holder for the title of the world's largest known organism, believed by most to be the 110-foot- (33.5-meter-) long, 200-ton blue whale. Based on its current growth rate, the fungus is estimated to be 2,400 years old but could be as ancient as 8,650 years, which would earn it a place among the oldest living organisms as well.
_________________