Most galaxies host a supermassive black hole (SMBH) at their nucleus. (A supermassive black hole is one whose mass exceeds a million solar-masses.) A key unresolved issue in galaxy formation and evolution is the role these SMBHs play in shaping their galaxies. Most astronomers agree that there must be a strong connection because of the observed correlations between a SMBH's mass and its galaxy's luminosity, stellar mass, and the stellar motions in the galaxy.

These correlations apply both in local galaxies and those at earlier cosmic epochs. But despite progress in studying SMBHs, how they effect their hosts is still not understood. In some suggested scenarios the SMBH suppresses star formation in the galaxy by expelling material. In others, like the merger scenario, the effect is the opposite: the SMBH boosts star formation by helping stir up the interstellar medium. Computer simulations have been undertaken to try to settle these differences, and they tend to show that cold gas flowing in from the intergalactic medium can feed both SMBH and galaxy growth. 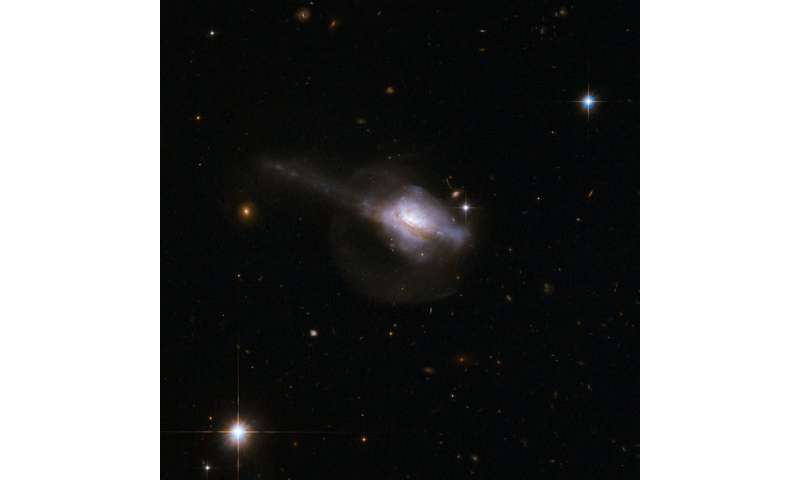 In this Hubble image, the tidal tail at the left suggests that the galaxy is actually a merging pair of galaxies. Astronomers studying how AGN influence their host galaxy's development have concluded that both grow together.

This simulation follows the collision of two spiral galaxies that harbor giant black holes. The collision merges the black holes and stirs up gas in both galaxies.

The merged black hole gorges on the feast and lights up, forming an active galactic nucleus called a quasar and creating a 'wind' that blows away much of the galaxy's gas.
_________________

This animation provides a close-up look at the behavior of a central black hole in the nucleus of an active galaxy. An accretion disk of infalling material surrounds a central black hole that may be millions or billions of times the mass of our Sun. Some of the superheated material escapes along the black hole's rotation axis.

A magnetohydrodynamics simulation of jets emerging from an active galactic nucleus (AGN) powered by the accretion of matter onto a supermassive black hole.

The AGN is in a crosswind, moving at nearly the local speed of sound through a background medium representative of the outskirts of a massive cluster of galaxies.