NASA's Voyager 2 probe, currently on a journey toward interstellar space, has detected an increase in cosmic rays that originate outside our solar system. Launched in 1977, Voyager 2 is a little less than 11 billion miles (about 17.7 billion kilometers) from Earth, or more than 118 times the distance from Earth to the Sun.

Since 2007 the probe has been traveling through the outermost layer of the heliosphere -- the vast bubble around the Sun and the planets dominated by solar material and magnetic fields. Voyager scientists have been watching for the spacecraft to reach the outer boundary of the heliosphere, known as the heliopause. Once Voyager 2 exits the heliosphere, it will become the second human-made object, after Voyager 1, to enter interstellar space. 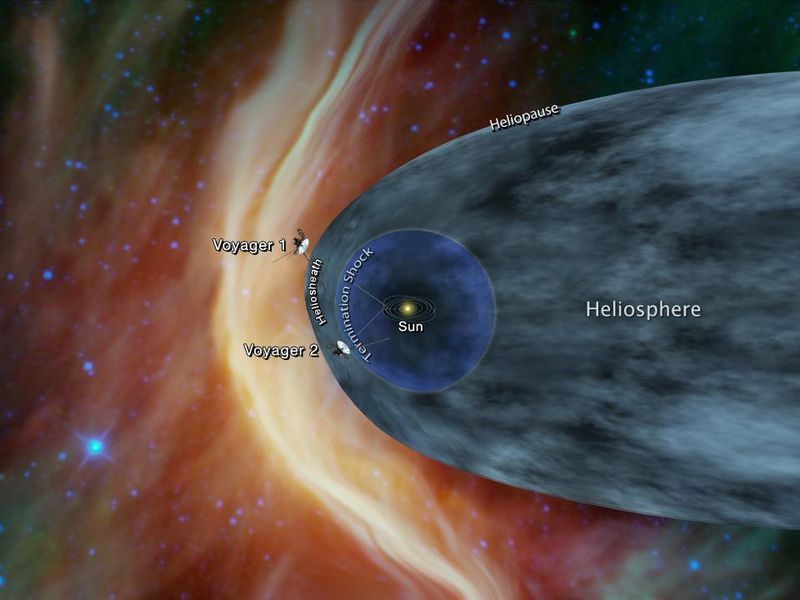 The Voyager spacecraft were built by JPL, which continues to operate both. JPL is a division of Caltech in Pasadena. California. The Voyager missions are a part of the NASA Heliophysics System Observatory, sponsored by the Heliophysics Division of the Science Mission Directorate in Washington.

On July 9, 1979, NASA's Voyager 2 spacecraft made its closest approach to Jupiter. It came within 354,000 miles (570,000 kilometers) of the planet's cloud tops. Voyager 2 was one of two space probes launched by NASA in 1977 to study the outer planets. It discovered a few rings around Jupiter.

Also, both Voyager 1 and 2 probes spotted volcanoes erupting on the Jupiter's moon, Io. Voyager 2 took longer to reach Jupiter than its sister spacecraft, Voyager 1, but also got to visit Uranus and Neptune. This made it the only spacecraft to visit either of the ice giants.
_________________