Using ESA's XMM-Newton space telescope, two researchers have observed the symbiotic star AG Pegasi after the end of its outburst in 2015. The observations, detailed in a paper published September 24 on the arXiv pre-print server, could reveal the real nature of this peculiar object.

AG Pegasi, or AG Peg for short (other designation HD 207757) is a binary consisting of a red giant and white dwarf. It is classified as a symbiotic nova due to its slow, nova-like outburst. The first recorded outburst of AG Peg occurred in the mid-19th century, while the latest was in 2015, during which the hot component if the binary increased in temperature. 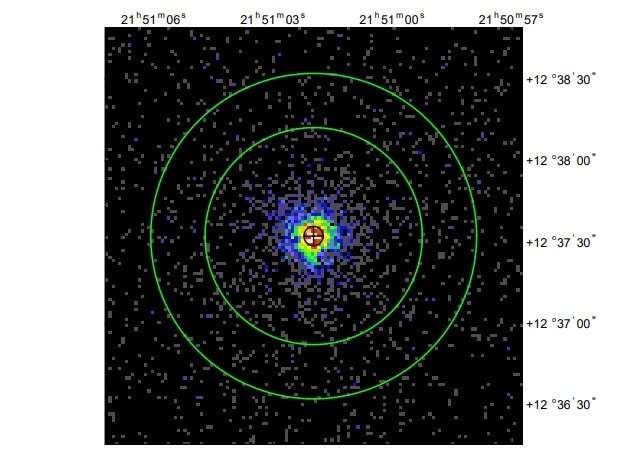 In biology, “symbiosis” refers to two organisms that live close to and interact with one another. Astronomers have long studied a class of stars — called symbiotic stars — that co-exist in a similar way. Using data from NASA’s Chandra X-ray Observatory and other telescopes, astronomers are gaining a better understanding of how volatile this close stellar relationship can be.

R Aquarii is one of the best known of the symbiotic stars. Located at a distance of about 710 light years from Earth, its changes in brightness were first noticed with the naked eye almost a thousand years ago. Since then, astronomers have studied this object and determined that R Aqr is not one star, but two: a small, dense white dwarf and a cool red, giant star.

Occasionally, enough material will be pulled from the red giant onto the surface of the white dwarf to trigger thermonuclear fusion of hydrogen. The release of energy from this process can produce a nova, an asymmetric explosion that blows off the outer layers of the star at velocities of ten million miles per hour or more, pumping energy and material into space.
_________________