The nearby dwarf galaxy known as the Large Magellanic Cloud (LMC) is a chemically primitive place.

Unlike the Milky Way, this semi-spiral collection of a few tens-of-billions of stars lacks our galaxy's rich abundance of heavy elements, like carbon, oxygen, and nitrogen. With such a dearth of heavy elements, astronomers predict that the LMC should contain a comparatively paltry amount of complex carbon-based molecules. Previous observations of the LMC seem to support that view.

New observations with the Atacama Large Millimeter/submillimeter Array (ALMA), however, have uncovered the surprisingly clear chemical "fingerprints" of the complex organic molecules methanol, dimethyl ether, and methyl formate. Though previous observations found hints of methanol in the LMC, the latter two are unprecedented findings and stand as the most complex molecules ever conclusively detected outside of our galaxy. 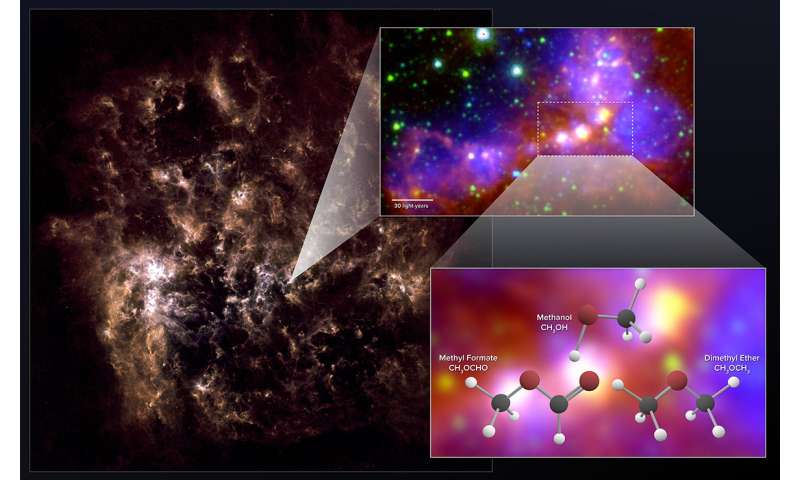 Astronomers using ALMA have uncovered chemical 'fingerprints' of methanol, dimethyl ether, and methyl formate in the Large Magellanic Cloud. The latter two molecules are the largest organic molecules ever conclusively detected outside the Milky Way. The far-infrared image on the left shows the full galaxy. The zoom-in image shows the star-forming region observed by ALMA. It is a combination of mid-infrared data from Spitzer and visible (H-alpha) data from the Blanco 4-meter telescope.

The video sequence takes the viewer from a wide view of the southern skies deep into a small nearby galaxy, the Small Magellanic Cloud. The final close-up infrared views are from a very detailed huge image of the galaxy taken using ESO's VISTA infrared survey telescope at the Paranal Observatory in Chile. Millions of stars and many star clusters and much more distant galaxies are visible.