Using the Atacama Large Millimeter Array (ALMA) in Chile, a team of researchers has detected the emission of deuterated formaldehyde (HDCO) from the hot inner region of the protostar HH 212. The finding, reported January 20 in a paper published on the arXiv.org pre-print repository, could be helpful in our understanding of chemical processes in this protostar and in similar objects.

HH 212 is a low-mass protostellar system located some 1,300 light years away in the Orion constellation. Previous studies of this protostar, conducted in 2016 and 2017, found that its "hot corino" (the warm inner region of the envelope surrounding the low-mass protostars) contains deuterated water (D2O) and singly deuterated methanol (CH2DOH).

Recently, a team of scientists led by Dipen Sahu of the Physical Research Laboratory (PRL) in Ahmedabad, India, has analyzed archival data obtained by ALMA, which observed HH 212 in December 2012. The analysis allowed the researchers to identify an emission of another molecule from the protostar's hot corino – deuterated formaldehyde. 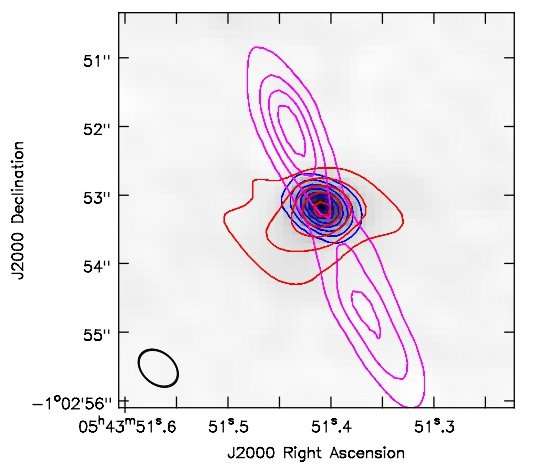 HH 212 is a nearby protostellar system in Orion at a distance of about 1300 ly. The central protostar is very young with an age of only ~40,000 years (which is about 10 millionth of the age of our Sun) and a mass of around a fifth part the one of the Sun. It drives a powerful bipolar jet and thus must accrete material efficiently.

» Cyclopropenylidene Detected in Atmosphere of Titan
» Superflare detected on an ultracool star
» Propionamide Detected in Space for First Time
» Over a thousand cosmic explosions detected in 47 days
» Helium detected in exoplanet atmosphere for the first time
Current date/time is Tue May 17, 2022 5:43 am