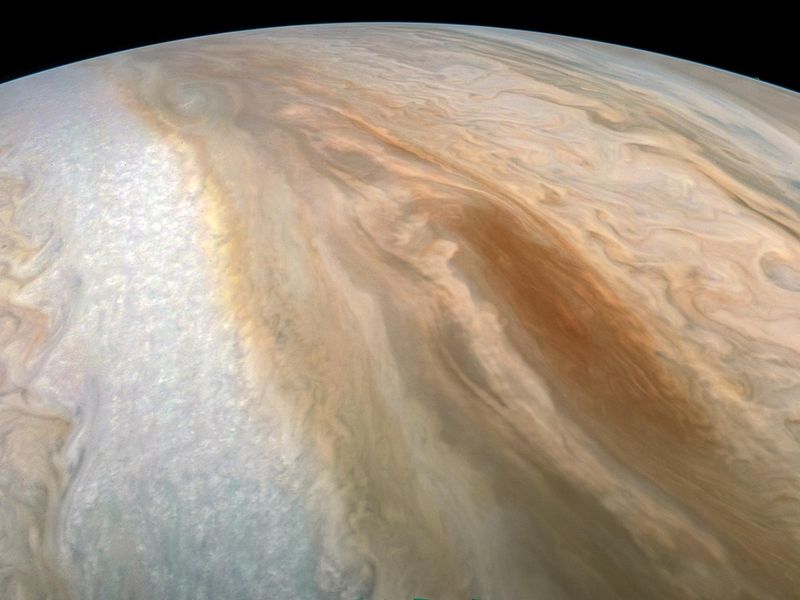 A long, brown oval known as a "brown barge" in Jupiter's South Equatorial Belt is captured in this color-enhanced image from NASA's Juno spacecraft.

Brown barges are cyclonic regions that usually lie within Jupiter's dark North Equatorial Belt, although they are sometimes found in the similarly dark South Equatorial Belt as well. They can often be difficult to detect visually because their color blends in with the dark surroundings. At other times, as with this image, the dark belt material recedes, creating a lighter-colored background against which the brown barge is more conspicuous. Brown barges usually dissipate after the entire cloud belt undergoes an upheaval and reorganizes itself. Juno is giving us the first glimpses of the detailed structure within such a barge

Data obtained using NASA's Juno spacecraft has revealed the depth of the "colorful bands of clouds" of the gas giant planet.
_________________

These holes in the ammonia clouds at the top of the atmosphere allow a glimpse into Jupiter's darker, hotter layers below.

In 1995 NASA's Galileo spacecraft dropped a probe directly into a hot spot, taking the first and only in situ measurements of Jupiter's atmosphere.

Now, movies recorded by NASA's Cassini spacecraft reveal that hot spots are not just local weather phenomena, but are in fact linked to much larger-scale atmospheric structures called Rossby waves.
_________________