A team of scientists, led by Boy Lankhaar at Chalmers University of Technology, has solved an important puzzle in astrochemistry—how to measure magnetic fields in space using methanol, the simplest form of alcohol. Their results, published in the journal Nature Astronomy, give astronomers a new way of investigating how massive stars are born.

Over the last half-century, many molecules have been discovered in space. Using radio telescopes, astronomers have, with the help of these molecules, been able to investigate just what happens in the dark, dense clouds where new stars and planets are born. Scientists can measure temperature, pressure and gas motion by studying the signature of molecules in the signals they detect. But there's another major player involved in massive star formation that's more difficult to measure: magnetic fields.

Boy Lankhaar at Chalmers University of Technology, who led the project, says, "When the biggest and heaviest stars are born, we know that magnetic fields play an important role. But just how magnetic fields affect the process is a subject of debate among researchers. So we need ways of measuring magnetic fields, and that's a real challenge. Now, thanks to our new calculations, we finally know how to do it with methanol."

Using measurements of methanol (CH3OH) in space to investigate magnetic fields was suggested many decades ago. In the dense gas surrounding many newborn stars, methanol molecules shine brightly as natural microwave lasers, or masers. The signals we can measure from methanol masers are both strong and emitted at very specific frequencies. 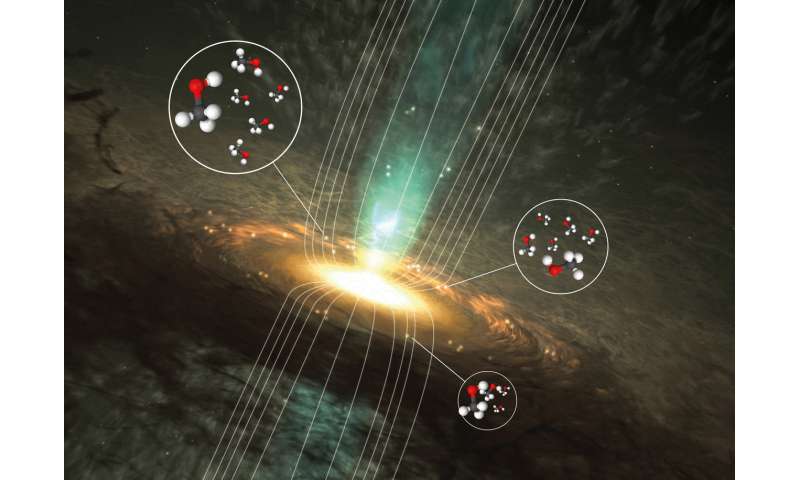 Magnetic fields play an important role in the places where most massive stars are born. This illustration shows the surroundings of a forming massive star, and the bright regions where radio signals from methanol can be found. The bright spots represent methanol masers -- natural lasers that are common in the dense environments where massive stars form -- and the curved lines represent the magnetic field. Thanks to new calculations by astrochemists, astronomers can now start to investigate magnetic fields in space by measuring the radio signals from methanol molecules in these bright sources.

Scientists use images such as this to observe how magnetic fields move around the sun and learn more about what causes active regions.

Researchers using NASA's Kepler space telescope have found evidence of strong magnetic fields in the cores of stars--a finding that could upset theories of stellar evolution.