Over the past few centuries, men harvesting peat in European bogs have discovered the preserved remains of hundreds of human corpses called “bog bodies”. Some of them are as old as 10,000 years. They have been recovered mostly in north-western Europe, especially in Ireland, Great Britain, the Netherlands, northern Germany, and Denmark. What makes bog bodies so unique is they are fantastically well preserved, often with skins and internal organs intact, thanks to the unusual chemistry of peat bogs.

Peat bogs are made up of accumulated layers of dead moss that contain highly acidic water, low temperature and poor oxygen, all of which contribute towards preservation of the bodies. Soft tissues, stomach contents, hair, nails, and clothing are frequently preserved well enough for forensic analysis. Stomach contents can provide information about diet, while teeth and nails provide useful clues about the person’s health and age. Clothes are an indicator of culture.

No one knows how these people ended up in the bogs, but the presence of horrific wounds, such as slashed throats, suggest the bodies had been sacrificed or executed as punishment for crimes. One of the most notable example of bog bodies, and one of the most well preserved, is Tollund Man, unearthed in Denmark in 1950. 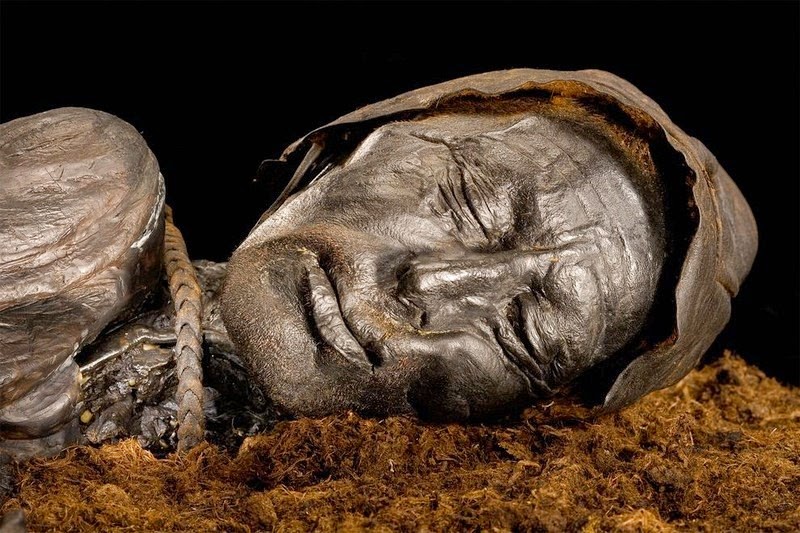 The remarkably well preserved head of the Tollund Man.