At the end of its life, a red supergiant star explodes in a hydrogen-rich supernova. By comparing observation results to simulation models, an international research team found that in many cases this explosion takes place inside a thick cloud of circumstellar matter shrouding the star. This result completely changes our understanding of the last stage of stellar evolution. 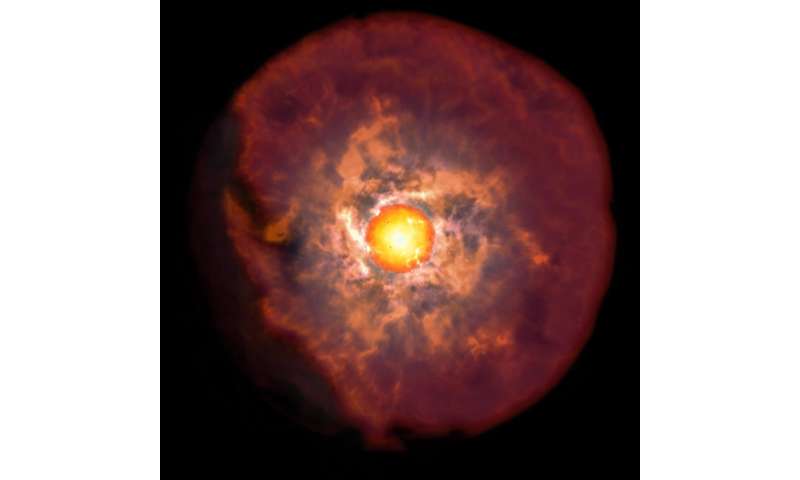 A trio of researchers with Universidad Catolica del Norte and the Max-Planck-Institut fur Radioastronomie has found evidence that suggests that convection alone cannot account for the amount of material that is pulled from the surface of a red supergiant.

In their paper published in the journal Nature, K. Ohnaka, G. Weigelt and K.-H. Hofmann describe their study of the supergiant Antares, what they found and why they now believe there is an unknown force pulling some parts of the star's surface into space.

The red supergiant Antares is familiar to stargazers as the heart of the scorpion in the Scorpius constellation. It is thought to be between 15 and 18 times as massive as the Sun, and have around 883 times its radius.

Hence, if placed in the center of the Solar System, its outer surface would lie between the orbits of Mars and Jupiter—it is also at the end stages of its existence.

Prior research has also shown that red giants have atmospheres that extend far from their surface—Antares, for example, has some regions that would extend all the way to Mars if it were in our solar system.

The prevailing theory explaining such far-reaching regions has been convection cells carrying the material away from the star. But now, that theory might have to be changed as the researchers with this new effort have found evidence that suggests convection alone could not lift as much material from Antares as they have measured.
_________________

» Stellar 'swarms' help astronomers understand the evolution of stars
» Scary giant blue stars may unlock mysteries of stellar evolution
» Giant clue in the search for Earth 2.0
» The Universe Will Provide all You Need - Trust it
» 'Cataclysmic' collision shaped Uranus' evolution
Current date/time is Tue May 17, 2022 4:43 am