Mission team members were thrilled – if not a little surprised – that New Horizons’ telescopic Long Range Reconnaissance Imager (LORRI) was able to see the small, dim object while still more than 100 million miles away, and against a dense background of stars. Taken Aug. 16 and transmitted home through NASA’s Deep Space Network over the following days, the set of 48 images marked the team’s first attempt to find Ultima with the spacecraft's own cameras.

"The image field is extremely rich with background stars, which makes it difficult to detect faint objects," said Hal Weaver, New Horizons project scientist and LORRI principal investigator from the Johns Hopkins Applied Physics Laboratory in Laurel, Maryland. “It really is like finding a needle in a haystack. In these first images, Ultima appears only as a bump on the side of a background star that’s roughly 17 times brighter, but Ultima will be getting brighter – and easier to see – as the spacecraft gets closer.” 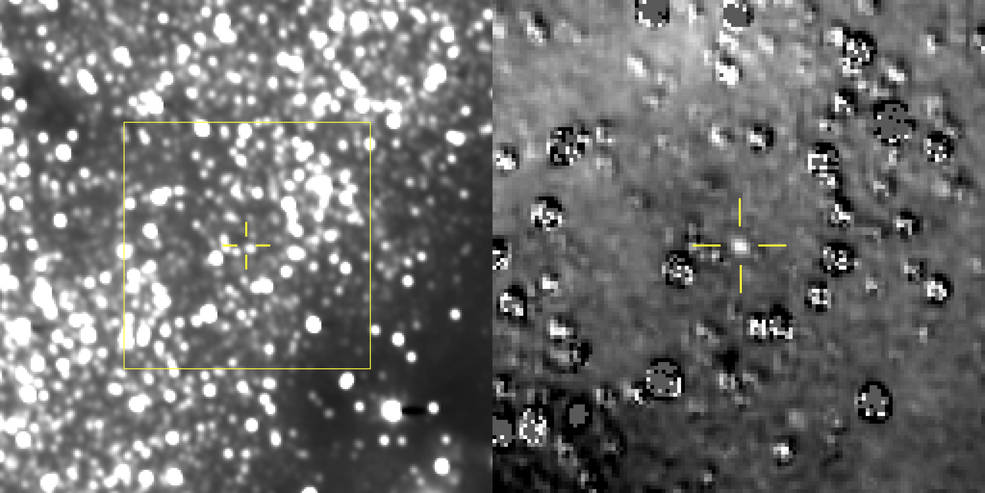 The figure on the left is a composite image produced by adding 48 different exposures from the News Horizons Long Range Reconnaissance Imager (LORRI), each with an exposure time of 29.967 seconds, taken on Aug. 16, 2018.

The predicted position of the Kuiper Belt object nicknamed Ultima Thule is at the center of the yellow box, and is indicated by the yellow crosshairs, just above and left of a nearby star that is approximately 17 times brighter than Ultima.

At right is a magnified view of the region in the yellow box, after subtraction of a background star field "template" taken by LORRI in September 2017 before it could detect the object itself.

Ultima is clearly detected in this star-subtracted image and is very close to where scientists predicted, indicating to the team that New Horizons is being targeted in the right direction.

The many artifacts in the star-subtracted image are caused either by small mis-registrations between the new LORRI images and the template, or by intrinsic brightness variations of the stars.