For centuries, scientists have worked to understand the makeup of Jupiter. It’s no wonder: this mysterious planet is the biggest one in our solar system by far, and chemically, the closest relative to the Sun. Understanding Jupiter is key to learning more about how our solar system formed, and even about how other solar systems develop.

But one critical question has bedeviled astronomers for generations: Is there water deep in Jupiter's atmosphere, and if so, how much?

Gordon L. Bjoraker, an astrophysicist at NASA's Goddard Space Flight Center in Greenbelt, Maryland, reported in a recent paper in the Astronomical Journal that he and his team have brought the Jovian research community closer to the answer.

By looking from ground-based telescopes at wavelengths sensitive to thermal radiation leaking from the depths of Jupiter's persistent storm, the Great Red Spot, they detected the chemical signatures of water above the planet’s deepest clouds. The pressure of the water, the researchers concluded, combined with their measurements of another oxygen-bearing gas, carbon monoxide, imply that Jupiter has 2 to 9 times more oxygen than the Sun. This finding supports theoretical and computer-simulation models that have predicted abundant water (H2O) on Jupiter made of oxygen (O) tied up with molecular hydrogen (H2). 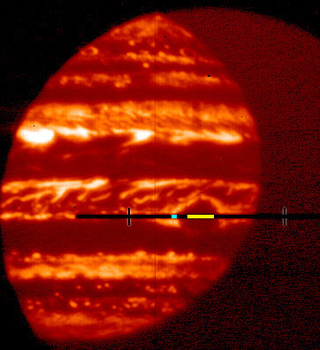 The Great Red Spot is the dark patch in the middle of this infrared image of Jupiter. It is dark due to the thick clouds that block thermal radiation. The yellow strip denotes the portion of the Great Red Spot used in astrophysicist Gordon L. Bjoraker’s analysis.

This animation takes the viewer on a simulated flight into, and then out of, Jupiter’s upper atmosphere at the location of the Great Red Spot. It was created by combining an image from the JunoCam imager on NASA's Juno spacecraft with a computer-generated animation.

The perspective begins about 2,000 miles (3,000 kilometers) above the cloud tops of the planet's southern hemisphere. The bar at far left indicates altitude during the quick descent; a second gauge next to that depicts the dramatic increase in temperature that occurs as the perspective dives deeper down.

The clouds turn crimson as the perspective passes through the Great Red Spot. Finally, the view ascends out of the spot.
_________________