If you only account for the matter we can see, our entire galaxy shouldn't exist. The combined gravitational pull of every known moon, planet, and star should not have been strong enough to produce a system as dense and complex as the Milky Way.

So what's held it all together?

Scientists believe there is a large amount of additional matter in the universe that we can't observe directly – so-called "dark matter." While it is not known what dark matter is made of, its effects on light and gravity are apparent in the very structure of our galaxy. This, combined with the even more mysterious "dark energy" thought to be speeding up the universe's expansion, could make up as much as 96 percent of the entire cosmos. 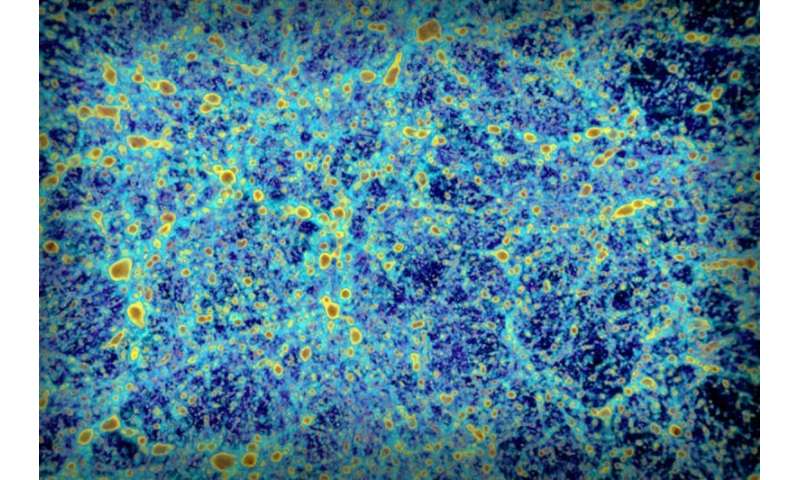 The end result is a model that not only recreates the emergence of stars and galaxies, but the influence of dark matter and the spread of heavy metals throughout the universe.
_________________

From HubbleCast and host Dr. J. Astronomers using the NASA/ESA Hubble Space Telescope have studied a giant filament of dark matter in 3D for the first time. Extending 60 million light-years from one of the most massive galaxy clusters known, the filament is part of the cosmic web that constitutes the large-scale structure of the Universe, and is a leftover of the very first moments after the Big Bang.

The theory of the Big Bang predicts that variations in the density of matter in the very first moments of the Universe led the bulk of the matter in the cosmos to condense into a web of tangled filaments.

This view is supported by computer simulations of cosmic evolution, which suggest that the Universe is structured like a web, with long filaments that connect to each other at the locations of massive galaxy clusters.

However, these filaments, although vast, are made mainly of dark matter, which is incredibly difficult to observe.
_________________