Astronomers from the University of Bristol, U.K., have uncovered an unusual doughnut-shaped jet in the radio galaxy NGC 6109. It is the first time that such a jet morphology has been observed in a low-power radio galaxy. The finding is detailed in a paper published August 6 on the arXiv pre-print repository.

Located approximately 400 million light years away, NGC 6109 is a low-power, head-tail radio galaxy. Observations of this galaxy four decades ago with the Westerbork Synthesis Radio Telescope (WSRT) revealed its radio tail extending for a projected distance of about 800,000 light years. Subsequent studies of this galaxy also revealed the presence of a counter jet located opposite its main jet. 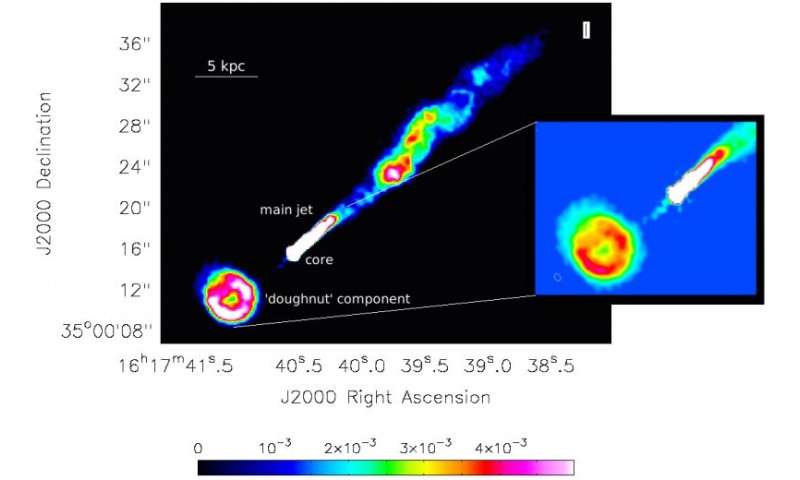 VLA S-band radio image of NGC 6109 at 0.8 arcsec resolution at 2.99 GHz. The main jet extends to the NW, and a bright knot is located approximately 1200 from the core. 400 SE of the core, a tight swirl of radio emission is seen.

This approximately circular component has a radius of 500 and diffuse emission is observed to the NE. The color bar shows the intensity scale in units of Jy beam−1.

Herbig Haro 666 is a young star that is shooting out narrow collimated jets in opposite directions. The jets are a byproduct of material falling onto to the star.

The material is heated and then escapes along the star’s spin axis. Blazing across space at 200,000 miles per hour, the jets provide a way for the star to slow its spin by carrying off angular momentum.

The star is hidden deep within the obscuring cloud of gas and dust shown in the Hubble visible-light image. In Hubble’s infrared view, the cloud mostly disappears, revealing the stars within.

The jets will extend out to a light-year before dissipating. Jets are a dramatic example of the interaction between stars and the gas and dust that surrounds them
_________________