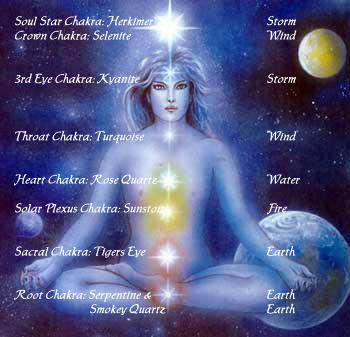 The soul star chakra is located six inches above the Crown chakra, above our physical body. Its width is 6 inches which may vary up to 2 feet in some people. It is the point from where Divine Love and Positive Energy may enter the body, hence being called also The Seat of the Soul.

This chakra is all about letting go and allowing Divine Light to fill your life. It represents Divine love, compassion and Unity.
This Meditation focuses on clearing all old programming and old vibes from your chakras.

Start by visualizing a brilliant white and golden star on the top of your body, envision it as it descends slowly down the front of your body, appearing at the front of your root chakra. Visualize the soul star going into your root chakra and see it moving slowly up and down the chakra, clearing the old from the inside out…. when the root chakra begins to vibrate, allow the positive and divine light of the soul star fill it and envelop it in the warmth of positive guiding light that’s vibrating on a root chakra frequency. Visualize the colour of red from the red colour soul star flame encourage compassion, grounding, ask for the old to be released from the chakra, as it continues to clear the older vibration energy from its depths.

When you are ready, visualize the soul star as in a bright yellow flame, watch as it makes the same descent on the outside of your body down to the front of the yellow solar plexus chakra, envision this soul star vibrant light clearing and cleansing the old emotional worries of those that are pent up and bottled in your chakra, release the old and the negative feelings of the past, the guilt, the regret, and rebukes, release anything that does not serve you purpose…..

when you are ready, envision the soul star changes to a much needed sky colour green which is good for helping with the heart chakra, watch as it ascends up through the chakras, again clearing away any guiding energy and energy that isn’t serving you much purpose, allowing you the chance to listen to your heart, and clearing away any eventual confusion or residue, allow it to clear and allow it to be released in the natural way that it should be released into the light…

when you are ready, the soul star might need a replenish of divine love and light so watch as its makes it way out of the heart centre and up to to the top where it gets its refill of boosting of energy… vitality and fresh higher energy frequenting at the same level of the chakras, clearing away much needed old cords, ties, blemishes, etc and filling it with universal light from the star itself

envision as this soul star flame emerges up the line and clears the purple chakra….of any imbalances, blockages, washing away the negativity, the under pressure ring of energy that may appear around the back of the eyes, clearing away it all and filling it with divine and universal light

last but not least is the crown chakra… finish that in the same way as you would with a white star flame to release the old… then see the star rising back up to the top to replenish and clear most of its old energy so that it reverts back to the beautiful vitality of starlight. Your chakras should now be feeling beautifully clear, but if needs be, do this exercise a couple of times to clear them fully.
Current date/time is Thu May 06, 2021 7:57 am