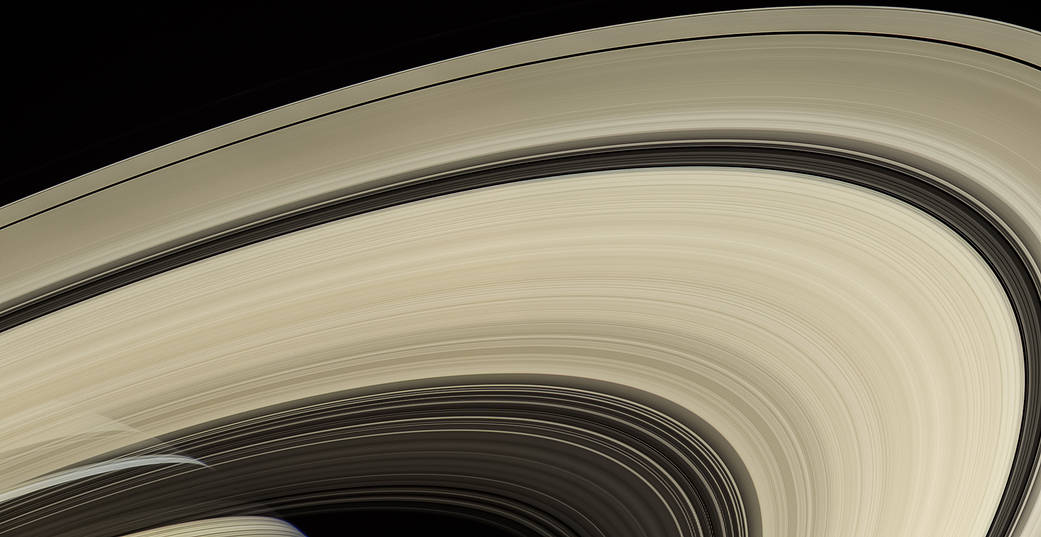 Saturn’s rings are perhaps the most recognized feature of any world in our solar system. Cassini spent more than a decade examining them more closely than any spacecraft before it.

The rings are made mostly of particles of water ice that range in size from smaller than a grain of sand to as large as mountains. The ring system extends up to 175,000 miles (282,000 kilometers) from the planet, but for all their immense width, the rings are razor-thin, about 30 feet (10 meters) thick in most places.

From the right angle you can see straight through the rings, as in this natural-color view that looks from south to north. Cassini obtained the images that comprise this mosaic on April 25, 2007, at a distance of approximately 450,000 miles (725,000 kilometers) from Saturn. The Cassini spacecraft ended its mission on Sept. 15, 2017.

In Saturn’s Rings is a groundbreaking giant-screen movie adventure that takes audiences on a space exploration journey of the mind, heart, and spirit, from the Big Bang to the awe-inspiring rings of Saturn.

Narrated by LeVar Burton, In Saturn’s Rings is created entirely of more than 7.5 million stunning images of Earth, the Milky Way, and the Saturn taken by Hubble, Cassini, and other NASA space telescopes looking deep into the past.
_________________

This video represents data collected by the Radio and Plasma Wave Science instrument on NASA's Cassini spacecraft, as it crossed the plane of Saturn's rings on Dec. 18, 2016.

The instrument is able to record ring particles striking the spacecraft in its data.

During this ring crossing, Cassini went through the faint, dusty ring that lies in the orbit shared by Saturnian moons Janus and Epimetheus.

In this data there is a clearly audible and visible rise, peak, and fall in the number of pops and cracks that represent ring particles striking the spacecraft.
_________________