Hours before the rise of the very star it will study, NASA’s Parker Solar Probe launched from Florida Sunday to begin its journey to the Sun, where it will undertake a landmark mission. The spacecraft will transmit its first science observations in December, beginning a revolution in our understanding of the star that makes life on Earth possible.

Roughly the size of a small car, the spacecraft lifted off at 3:31 a.m. EDT on a United Launch Alliance Delta IV Heavy rocket from Space Launch Complex-37 at Cape Canaveral Air Force Station. At 5:33 a.m., the mission operations manager reported that the spacecraft was healthy and operating normally. 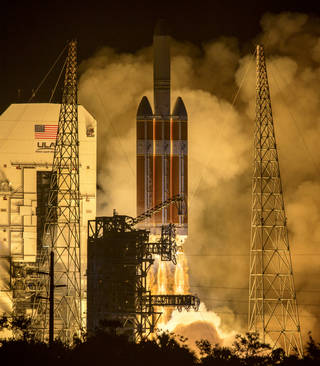 Parker Solar Probe is humanity’s first-ever mission into a part of the Sun’s atmosphere called the corona. Here it will directly explore solar processes that are key to understanding and forecasting space weather events that can impact life on Earth.

Dr. Eugene Parker watches the launch of the spacecraft that bears his name — NASA’s Parker Solar Probe — early in the morning of Aug. 12, 2018.

Parker Solar Probe is humanity’s first mission to the Sun and will travel closer to our star than any spacecraft before.
_________________

The mission will be the first to fly directly through the Sun’s corona – the hazardous region of intense heat and solar radiation in the Sun’s atmosphere that is visible during an eclipse. It will gather data that could help answer questions about solar physics that have puzzled scientists for decades.

Gathering information about fundamental processes near the Sun can help improve our understanding of how our solar system’s star changes the space environment, where space weather can affect astronauts, interfere with satellite orbits, or damage spacecraft electronics.
_________________