A pair of dwarf galaxies closely circling the Milky Way, the Large and Small Magellanic Clouds, were in the throes of merging into one when they fell into our galaxy. The duo is thought to hold enough gas to replenish half of the Milky Way's supply of star-making fuel, and now, a study in the Monthly Notices of the Royal Astronomical Society offers new insights into how galaxies like ours are able to capture this gas so easily. 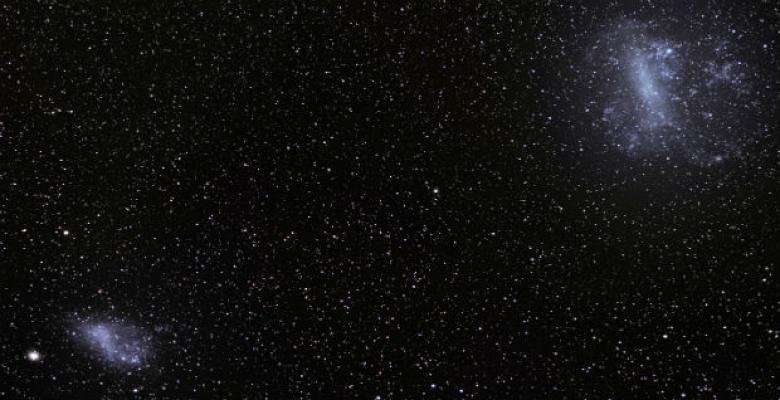 In a new study, astronomers show how gas expelled in the merger of two small galaxies can linger across vast distances for billions of years, where it may eventually feed gas to more massive galaxies to make new stars. The Large Magellanic Cloud and the Small Magellanic Cloud pictured above are a pair of dwarf galaxies that were in the process of merging when they fell into the Milky Way. Their gas is expected to replenish half of the gas consumed by our galaxy as it forms new stars.

NGC 2207 is a pair of colliding spiral galaxies. Their bright central nuclei resemble a striking set of eyes.

In visible light, trails of stars and gas trace out spiral arms, stretched by the tidal pull between the galaxies. When seen in infrared light (IR), the glow of warm dust appears. This dust is the raw material for the creation of new stars and planets.

Complementary to the IR, the X-ray view reveals areas of active star formation and the birth of super star clusters. Though individual stars are too far apart to collide, the material between the stars merges to create high-density pockets of gas.

These regions gravitationally collapse to trigger a firestorm of starbirth. The galaxy collision will go on for several millions of years, leaving the galaxies completely altered in terms of their shapes.
_________________