An international team of researchers has discovered what they describe as an inside-out planetary nebula—a planetary nebula with surroundings that are the opposite of what normally occurs. In their paper published in the journal Nature Astronomy, the group describes their find and offer possible explanations for its existence. 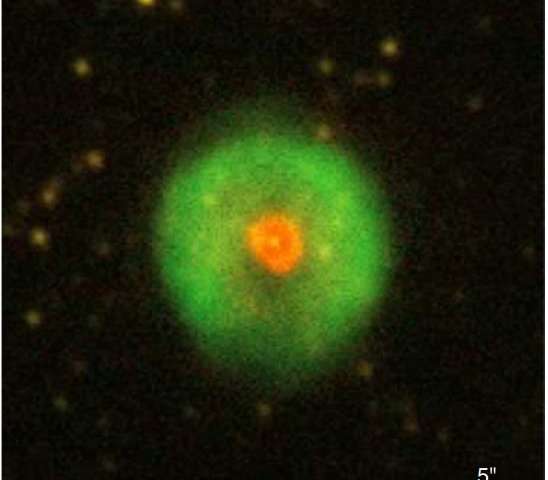 Planetary nebulae are one of the final stages in the life of stars of low and intermediate mass, such as the Sun. After exhausting their fuel, these stars are detached from their outer layers, which form an envelope of ionized gas around a star of white dwarf type.

Precisely HuBil1 presents an inverted ionization structure, product of its peculiar evolution, reason why it is "a reborn star". HuBi1 appears to be a typical double planetary nebula, with an outer diffuse gas envelope and a bright central shell, but this research has revealed its peculiarities: the outer gas envelope is recombining, an unprecedented fact in a planetary nebula, and the star Central has gone off in just fifty years.

The central star of HuBi1, instead of progressively shutting down, revived thanks to a late thermal pulse that fused the helium of its surface.
_________________

This strange corkscrew pattern was caused by a wobbling accretion disc encircling a former "vampire star," a star that was sucking material off of a nearby companion star. Currently, Fleming 1 is thought to have not one but two white dwarfs at its center, circling each other every 1.2 days.

Although binary stars have been found at the hearts of planetary nebulae before, systems with two white dwarfs orbiting each other are very rare.
_________________

The Helix Nebula explored in this clip is a planetary nebula, a glowing gaseous envelope expelled by a dying, sun-like star.
_________________