GW170817 is the name given to a gravitational wave signal seen by the LIGO and Virgo detectors on 17 August 2017. Lasting for about 100 seconds, the signal was produced by the merger of two neutron stars. The observation was then confirmed - the first time this has happened for gravitational waves - by observations with light waves: the preceding five detections of merging black holes did not have (and were not expected to have) any detectable electromagnetic signals. The light from the neutron star merger is produced by the radioactive decay of atomic nuclei created in the event. 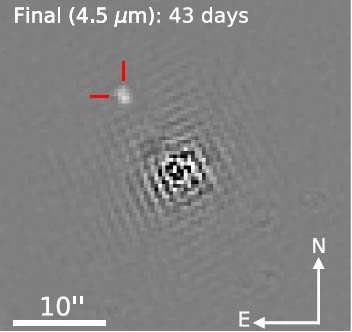 The IRAC infrared image of the emission at 4.5 microns from the merger of two neutron stars first detected by gravitational wave detectors. The image was taken 43 days after the merger event. After sophisticated processing to remove most of a very bright nearby object, the merger source can be clearly seen in the upper left, highlighted with red.

On August 17, 2017 the LIGO and Virgo detectors detected the collision of two astrophysical objects that are consistent with neutron stars (GW170817).

As these neutron stars spiraled together, they emitted gravitational waves that were detectable for about 100 seconds by the LIGO and Virgo detectors. When they collided, a flash of light in the form of gamma rays was emitted and seen on Earth about two seconds after the gravitational waves.

In the days and weeks following the smashup, other forms of light, or electromagnetic radiation — including X-ray, ultraviolet, optical, infrared, and radio waves — were detected.

This movie presents the collision of two neutron stars, resulting in a stable neutron star with an accretion disk. This serves as an illustration of the possible outcomes of the gravitational wave transient GW170817.
_________________