NASA’s Hubble Space Telescope has photographed Saturn and Mars near their closest approaches to Earth in June and July 2018. It’s now summertime in Saturn’s northern hemisphere and springtime in Mars’ southern hemisphere. The Hubble images show that Earth isn’t the only planet where intense spring and summer storms wreak havoc.

The increase in sunlight in Saturn’s northern hemisphere has heated the atmosphere to trigger a large storm that is now disintegrating in Saturn’s polar region.

On Mars, a dust storm erupted in the southern hemisphere and ballooned into a global dust storm enshrouding the entire planet. 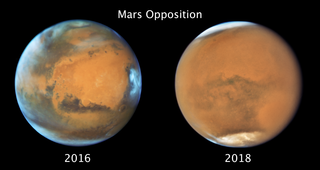 These side-by-side images of Mars, taken roughly two years apart, show very different views of the same hemisphere of Mars. Both were captured when Mars was near opposition, which occurs about every two years, when Earth’s orbit catches up to Mars’ orbit. At that time, the Sun, Earth and Mars fall in a straight line, with Mars and the Sun on “opposing” sides of Earth. The image on the left, taken on May 12, 2016, shows a clear atmosphere. The picture on the right, taken on July 18, 2018, features a global dust storm, with spring in the southern hemisphere. 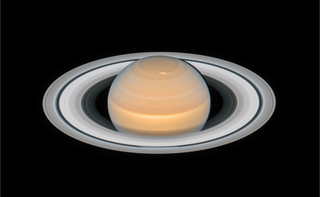 Saturn is by far the solar system’s most photogenic planet, and in this latest Hubble Space Telescope snapshot it is especially so because Saturn’s magnificent ring system is near its maximum tilt toward Earth (which was in 2017). Hubble was used to observe the planet on June 6, 2018, when Saturn was only approximately 1.36 billion miles from Earth, nearly as close to us as it ever gets 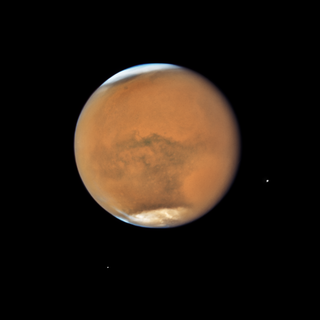 NASA’s Hubble Space Telescope photographed Mars on July 18, near its closest approach to Earth since 2003. The planet was observed near opposition, when the Sun, Earth and Mars are lined up, with Earth sitting in between the Sun and Mars. This proximity gives the Red Planet its brightest appearance in the night sky since the 2003 opposition.