What powers the most luminous galaxies?

What powers the most luminous galaxies?

Galaxy-galaxy interactions have long been known to influence galaxy evolution. They are commonplace events, and a large majority of galaxies show signs of interactions, including tidal tails or other morphological distortions. The most dramatic collisions trigger the galaxies to light up, especially in the infrared, and they are some of the most luminous objects in the sky. Their brightness allows them to be studied at cosmological distances, helping astronomers reconstruct activity in the early universe. 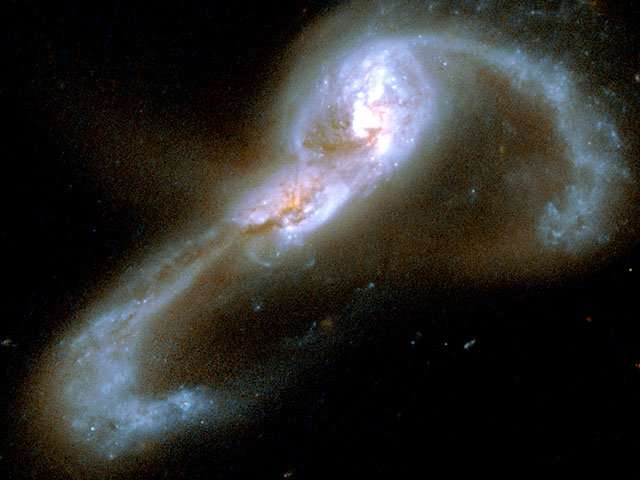 The colliding galaxy pair VV705. Astronomers have measured a set of merging galaxies to determine the relative contributions to luminosity from star formation versus from accretion around the supermassive black hole nucleus. For VV705, they find that nearly 75% of the luminosity comes from star formation.

NGC 2207 is a pair of colliding spiral galaxies. Their bright central nuclei resemble a striking set of eyes. In visible light, trails of stars and gas trace out spiral arms, stretched by the tidal pull between the galaxies.

When seen in infrared light (IR), the glow of warm dust appears. This dust is the raw material for the creation of new stars and planets. Complementary to the IR, the X-ray view reveals areas of active star formation and the birth of super star clusters.

Though individual stars are too far apart to collide, the material between the stars merges to create high-density pockets of gas.

These regions gravitationally collapse to trigger a firestorm of starbirth. The galaxy collision will go on for several millions of years, leaving the galaxies completely altered in terms of their shapes.
_________________

This video zooms into the core of a rich star-birth region called the Lagoon Nebula, located in the constellation Sagittarius in the direction of our Milky Way galaxy’s central bulge.

The sequence then dissolves to a series of imagined three-dimensional flights past striking structures of this gaseous landscape.

Viewers examine dark, dusty clouds silhouetted against a colorful background of luminous gas that has been heated by a massive star.

Pillars of dense gas and bow shocks around newborn stars are shaped by the strong winds from the brightest stars.

The intense high-energy emission from these same stars creates the glowing ridges of gas in ionization fronts. These features are some of the highlights of this vibrant region where new stars and planets are born.
_________________

This visualization explores the Orion Nebula using both visible and infrared light.

As the camera flies into the star-forming region, the sequence cross-fades back and forth between the visible and infrared views.

The glowing gaseous landscape has been illuminated and carved by the high energy radiation and strong stellar winds from the massive hot stars in the central cluster.