Two exoplanets in the TRAPPIST-1 system have been identified as most likely to be habitable, a paper by PSI Senior Scientist Amy Barr says.

The TRAPPIST-1 system has been of great interest to observers and planetary scientists because it seems to contain seven planets that are all roughly Earth-sized, Barr and co-authors Vera Dobos and Laszlo L. Kiss said in "Interior Structures and Tidal Heating in the TRAPPIST-1 Planets" that appears in Astronomy & Astrophysics.

"Because the TRAPPIST-1 star is very old and dim, the surfaces of the planets have relatively cool temperatures by planetary standards, ranging from 400 degrees Kelvin (260 degrees Fahrenheit), which is cooler than Venus, to 167 degrees Kelvin (-159 degrees Fahrenheit), which is colder than Earth's poles," Barr said. "The planets also orbit very close to the star, with orbital periods of a few days. Because their orbits are eccentric –not quite circular – these planets could experience tidal heating just like the moons of Jupiter and Saturn." 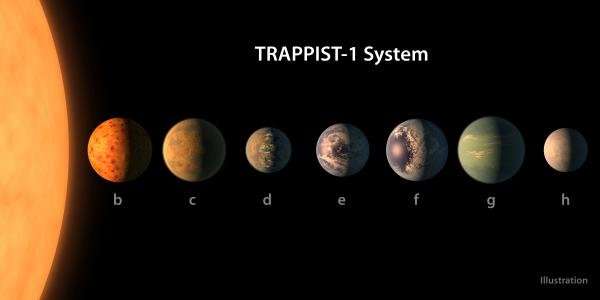 A size comparison of the planets of the TRAPPIST-1 system, lined up in order of increasing distance from their host star. The planetary surfaces are portrayed with an artist’s impression of their potential surface features, including water, ice, and atmospheres. Amy Barr's paper “Interior Structures and Tidal Heating in the TRAPPIST-1 Planets” shows that planets d and e are the most likely to be habitable due to their moderate surface temperatures, modest amounts of tidal heating, and because their heat fluxes are low enough to avoid entering a runaway greenhouse state. Planet d is likely covered by a global water ocean.

An dwarf star named TRAPPIST-1, which is located about 39 light-years from Earth, harbors more planets than previously observed. Climate models suggest that the three closest to the star would likely be too hot for liquid water to exist “on any more than a small fraction of their surfaces,” according to the European Southern Observatory. The furthest planet is too cold for water but temperatures may be just right on the other three planets.