Near-Earth objects (NEOs) are small solar system bodies whose orbits sometimes bring them close to the Earth, potentially threatening a collision. NEOs are tracers of the composition, dynamics and environmental conditions throughout the solar system and of the history of our planetary system. Most meteorites come from NEOs, which are thus one of our key sources of knowledge about the solar system's development. Because some of them are easier to reach with spacecraft than the Moon or planets, NEOs are potential targets for NASA missions. The total number of known NEOs exceeds 18000. The discovery rate has risen rapidly recently, driven by in part the 1998 mandate of Congress to identify 90 percent of NEOs larger than 1 km (in 2005 Congress, recognizing the danger posed even by smaller NEOs, extended the mandate to sizes as small as 140 meters.) 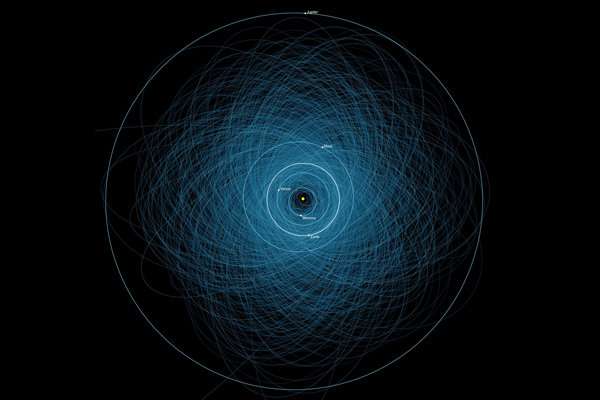 A diagram of the orbits of many known Near Earth Objects. Astronomers have estimated that about 18 percent of reported NEOs have been unable to have confirmation observations.

A few NASA-funded astronomer teams are always on the hunt for potentially hazardous near-Earth objects, asteroids and comets whose orbits periodically bring them within 30 million miles of Earth’s orbit. At NASA, the Planetary Defense Coordination Office supports the search programs, while also planning and coordinating any response to possible asteroid impacts.

As part of NASA’s planetary defense strategy, the Center for Near Earth Object Studies at the Jet Propulsion Laboratory analyzes the data collected on near-Earth objects and publishes the running statistics on numbers and types discovered. NASA is not only hunting asteroids, it’s also working on ways to defend Earth against them.

Astrodynamicists at the Center for Near Earth Object Studies predict orbits a century into the future to determine whether there are any risks for impact.

For example, if an approaching asteroid were detected early enough, its path could be altered by using a large spacecraft as a ‘gravity tractor.’ It would fly alongside the asteroid for an extended time and slowly pull it out of Earth’s path using nature’s virtual tug-rope -- gravity.

Another method involves sending a heavy, high-speed spacecraft into the path of an approaching object to strike it at the right time and place. This technique, called the kinetic impactor, could slow or speed up the asteroid into a different trajectory, away from the Earth’s path. All these techniques are in some stage of study or design.
_________________

I found this website, it's a Near- Earth Asteroid tracker