ESA's XMM-Newton observatory has discovered the best-ever candidate for a very rare and elusive type of cosmic phenomenon: a medium-weight black hole in the process of tearing apart and feasting on a nearby star.

There are various types of black hole lurking throughout the Universe: massive stars create stellar-mass black holes when they die, while galaxies host supermassive black holes at their centres, with masses equivalent to millions or billions of Suns. 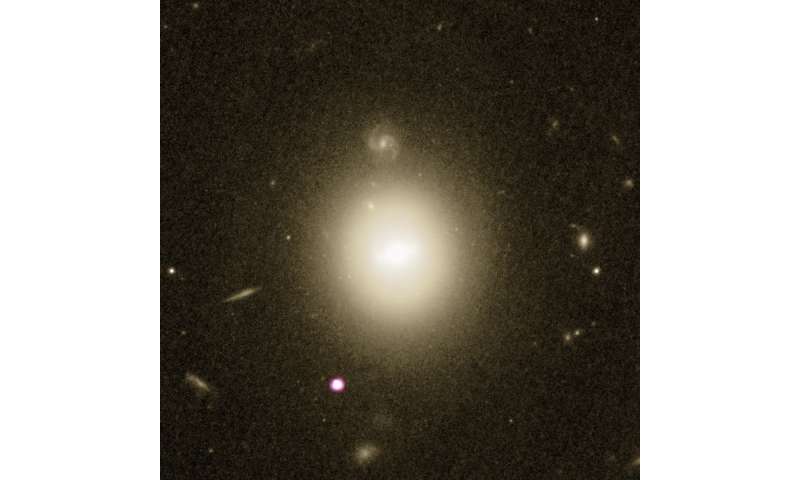 Data from NASA/ESA's Hubble Space Telescope (yellow-white) and NASA's Chandra X-ray Observatory (purple). The purple-white source in the lower left shows X-ray emission from the remains of a star that was ripped apart as it fell towards an intermediate mass black hole. The host galaxy of the black hole is located in the middle of the image. 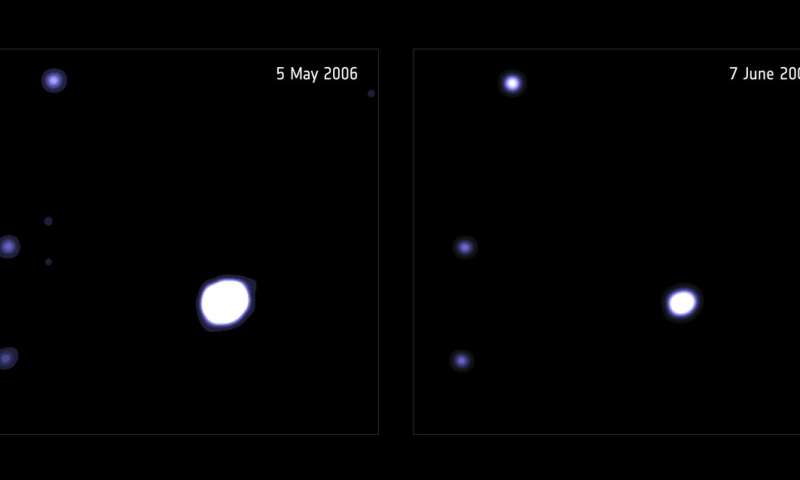 The X-ray source 3XMM J215022.4−055108, viewed with ESA’s XMM-Newton X-ray space observatory in 2006 (left) and 2009 (right). This is the best-ever candidate for a very rare and elusive type of cosmic phenomenon: a so-called intermediate-mass black hole in the process of tearing apart and feasting on a nearby star. This rare breed of black hole was spotted as it disrupted and tore apart a nearby star, gorging on the resulting debris and throwing off an enormous amount of light in the process. It has a mass of around fifty thousand times that of the Sun, and is located within a massive cluster of stars on the outskirts of a galaxy some 740 million light-years away. A comparison between these two images shows how the burst of energy released by this powerful event gradually decreased over the years.

Scientists have discovered that supermassive black holes in the centers of galaxies may be growing faster than their host galaxies.

This challenges the long-held belief that black holes and their galaxies grow in lockstep.

Astronomers have caught a supermassive black hole in a distant galaxy snacking on gas and then "burping" — not once, but twice.

The dining galaxy is known by its abbreviated name, J1354, and is about 800 million light years from Earth. Scientists used observations from NASA's Chandra X-ray Observatory and Hubble Space Telescope, as well as the ground-based optical telescopes to track both the behavior and diet of this monster-sized black hole.

The Chandra data revealed a bright, point-like source of X-ray emission at the center of J1354, a telltale sign of the presence of a black hole containing millions or billions of times more mass than our sun.

The X-ray data also provide evidence that the supermassive black hole is embedded in a heavy veil of gas.

The researchers found evidence that in the past the supermassive black hole consumed large amounts of gas while blasting off an outflow of high-energy particles. Eventually, this outflow turned off, and then turned back on with another black hole snack about 100,000 later.
_________________